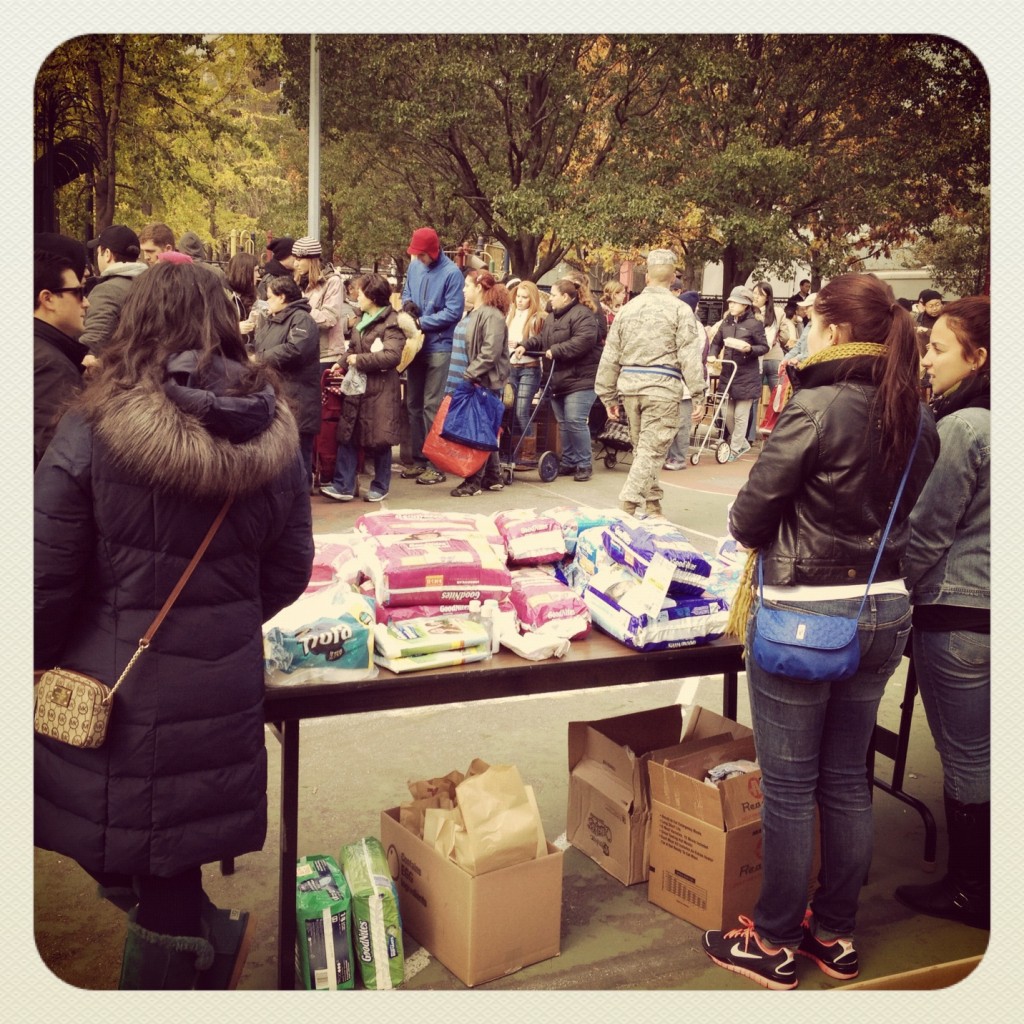 Alphabet City, home to the Con Ed power plant, was harder hit by Hurricane Sandy than most of Manhattan. Residents who survived massive flooding, dwindling food supplies and lingering power outages finally saw some relief this weekend as the National Guard and volunteers distributed water, food, diapers and other essentials.

I never thought I would see National Guard trucks roaming the East Village, but their presence was a welcome sight. Residents patiently stood on meandering lines, waiting to fill up their shopping carts, while dozens of volunteers crowded Avenue D hoping for an opportunity to help.

The following photos of Alphabet City show the recovery efforts on Saturday, November 3, 2012; all were taken on an iPhone 4S and edited with Instagram. Click here for more photos of Sandy’s impact on the East Village.

Let There Be Light! Lower Manhattan celebrated the return of power and cell service on Friday night, an event which caused New Yorkers to cheer and celebrate in the streets. Bodegas and some restaurants immediately began to open their doors to customers looking for hot meals and more diverse cuisine. (Spaghetti and canned sauce can get a bit tiring). However, it will be days and maybe weeks before parts of Lower Manhattan return to normalcy. Broken down cars, their windshields still steaming with condensation, serve as a reminder of the flood waters that covered Alphabet City just days ago. On Avenue C, Con Ed employees were hard at work and business owners were cleaning out their flooded basements. With Internet service restored, many New Yorkers scoured Twitter and news sites for opportunities to volunteer in Lower Manhattan. Many posts linked to the NYC Service website, which listed calls for blood donations, supplies and monetary donations as well as some in-person volunteer opportunities. Hand-written signs (like this one by councilwoman Rosie Mendez on E 14th Street) directed volunteers to specific sites in Lower Manhattan. Like many New Yorkers, I wanted to help distribute food to seniors trapped in public housing or clean up a ravaged park. However, demand to volunteer was so high on Saturday morning that the NY Parks department website was no longer accepting online registration for their Manhattan clean-ups. Each time we went to an East Village volunteer location announced on Twitter, the number of volunteers appeared to outweigh the actual need. Hundreds of potential volunteers gathered on Avenue B outside GOLES, a community organization that was planning to knock on doors to assess the needs of local residents. As the crowd spilled onto the street, we heard some people say they had already been turned away at Stuyvesant Town due to the overwhelming number of volunteers.

I would love to volunteer in Staten Island or the Rockaways, where the need for help likely outstrips the supply of volunteers. But without a car and with public transportation still spotty, traveling beyond Manhattan seems like a risky proposition. In the shadow of the Con Ed plant, the National Guard and volunteers managed the distribution of food and supplies. Residents filled plastic bags and shopping carts with bags of cereal, packaged salsa and other items that were hard to come by in the past week. Neighbors stopped one another on the street to spread the word about what food was available. The National Guard was not here to police the neighborhood but to hand out supplies. The mood on E 10th street and Avenue D was upbeat; the lines were orderly and seemed to move quickly. Residents filed through a row of tables filled with diapers and other supplies. The National Guard presence in Alphabet City provided a stark contrast to the New Orleans scenes we witnessed on TV during Hurricane Katrina. No guns were drawn (or visible), and it was clear this was a humanitarian mission. While waiting on line, a father snapped a photo of his son with National Guard troops. The National Guard also watched the exit to ensure there were no line-cutters. Walking through Alphabet City, I couldn’t help but find new meaning in the street art covering the neighborhood. This woman looks sad but defiant in the face of post-Sandy damage. Many local markets and bodegas opened their doors on Saturday, but had yet to throw out their spoiled dairy products– leading to an unpleasant smell. A local dog, Arthur, is still missing after running off during the storm on Monday night and his image is plastered across the neighborhood. Let’s hope he gets back to his owner soon! Many of the community gardens that dot the East Village have already been cleaned by residents. Theodore (of The Chipmunks) seems to have weathered the storm quite well in Alphabet City.

How was your neighborhood affected by Sandy?