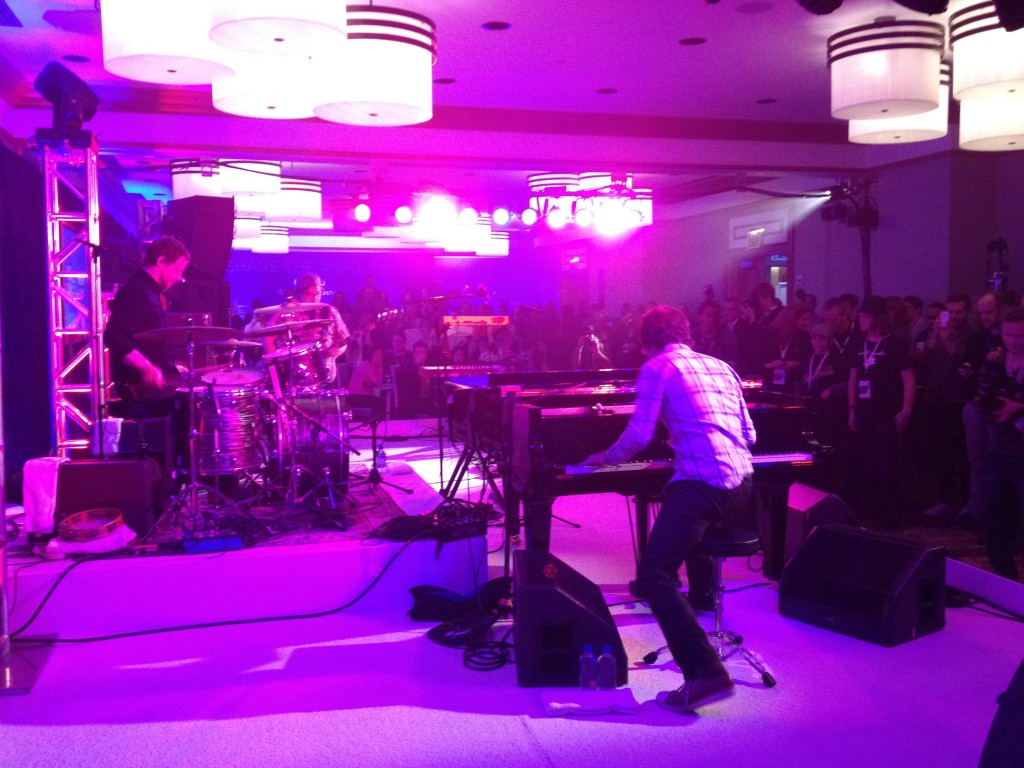 What can you get with 5,000 hotel loyalty points?

If you’re a Starwood Preferred Guest, you can now get VIP access to bands like Ben Folds Five through a series of exclusive events that are only open to reward program members.

I was lucky enough to score an invite to last month’s Ben Folds Five concert– their first performance in 13 years– at the Westin Grand Central, which is such an intimate venue that it was impossible to get a bad seat. In fact, several of the seats were actually beds! Hotel loyalty programs have always been straightforward: you try your hardest to book stays with one hotel brand in the hopes of racking up enough miles for “free” nights. This model has been popular since at least the 1980s, when my parents became Marriott devotees and started obsessively accumulating their points with special credit cards and frequent stays.

Fortunately, hotels are finally recognizing that travelers want a bit more in return for their loyalty. As part of the “SPG Life” campaign, Starwood customers can now gain access to intimate concerts like the Ben Folds Five performance at the Westin, for only 5,000 points. I brought my friend Aly to the event (who you may recognize from this NYC Girl’s Getaway story). We spent our formative years in the 1990s, so we were familiar with Ben Folds Five but had not heard their music in quite a while.

We were pleasantly surprised when we arrived at the Westin Grand Central ballroom to find a red carpet where guests were encouraged to pose for photos. We felt like bona fide VIPs as we vamped it up for the cameras.

The biggest surprise of the evening, however, came when we were invited to a “meet and greet” with the band! I had prepared for this remote possibility by watching Ben Folds Five’s most recent music video on You Tube and scouring Wikipedia to beef up on my band knowledge. (This got Aly and I started on a nostalgic email chain in which we relived some classic 1990s music memories).

As it turned out, we didn’t have much time to chat with Ben Folds or his crew. We were guided into a hotel room where the band was already arranged against a wall and slipped into to the two spaces that were conveniently left open between the band members. While smiling for a row of cameras, we quickly exchanged pleasantries, tried to match the band’s finesse at posing and then were ushered back to the reception area.

While I didn’t get to probe Ben Folds on his musical influences, it was fun meeting the band and feeling like a true VIP. Aly and I were allowed into the concert area for a sneak peak of the stage before the Ben Folds Five performance. A space that might typically serve as a conference venue had been completely transformed by violet lights and white furniture into a funky lounge. Two bars were set up at the entrances and a series of “heavenly beds” flanked the stage.

The beds contained the Westin’s signature down pillows and thick duvets, and were arranged so guests could actually recline while watching the band. After some experimentation, we discovered the beds could comfortably fit four New York City women! We were initially told the beds were reserved for “contest winners” but discovered through some friendly investigating that the concert goers who snatched them up were run-of-the-mill SPG loyalty members.

So for 5,000 SPG points a person, these Ben Folds Fans were able to watch their favorite band while sipping champagne and laying on a comfy bed. Not a bad deal!

While waiting for Ben Folds Five to perform, we met two guys in their early 30s who hailed from the band’s hometown in North Carolina. One was a lawyer who said his most recent business trip had generated enough points to cover the concert. Like many of the concert goers, they were diehard Ben Folds Five fans who knew just about every lyric and had seen the band perform before (but never in such an intimate venue). Ben Folds Five’s sound has been described as “piano rock” so I was expecting low-key melodies. Instead I was treated to a lively, almost athletic performance. Ben Folds cracked jokes, asked the audience to get him a drink from the open bar (they did) and jumped from his stool when a particular stanza moved him.

Audience members spanned a range of ages– from a tween boy who knew every word of “Brick” to 40-something couples in business casual attire– but they were united in their enthusiasm for the band. About two dozen fans stood around the stage, which put them within ten feet of Ben Folds. The SPG Life concert wasn’t just about the music. In a nod to social media, organizers set up a wall of monitors that showed the latest Twitter and Instagram postings tagged with #spglife, so guests were treated to photos of me and Aly toasting champagne and nibbling on decadent desserts. An on-site printer also provided hard copies of our Instagram pics.

We grazed at the crudite and cheese table, ordered fresh sushi from an on-site chef, filled our plates with tender macarons and mini cupcakes, and enjoyed drinks from the open bar.

The abundant food and drinks were available to every guest at the event. I was impressed that SPG gives loyalty members a chance to experience the perks normally reserved for members of the press or industry.

From walking the red carpet to reclining on a heavenly bed, Starwood Preferred Guest members will feel like VIPs at the SPG Life event series. I actually booked a Westin on my last trip, just to accumulate points that I can redeem for future concerts!

>> Check out this video of the Ben Folds Five performance, their first in 13 years, released first to Downtown Traveler!