NYC memories: Growing up in the East Village in the 1950s

This week we’re honored to feature Billie Frank as a contributor. Billie is freelance writer based in Santa Fe, New Mexico; she writes about art, history and culture on SantaFeTravelers.com. In this post, Billie shares memories of her childhood in the East Village, which is now one of New York City’s trendiest neighborhoods. 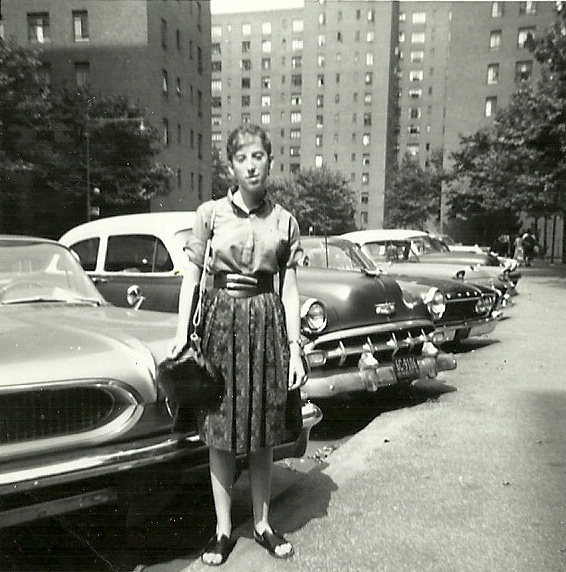 Billie dressed in "Greenwich Village apparel," circa 1959. Her belt, sandals and purse were all handmade. (photo: Billie Frank)

I grew up in the 1950s in Stuyvesant Town, a middle-class development built after World War II to help alleviate the housing shortage in NYC. This little city within a city, home to over 40,000 residents, displaced many people who lived in the 19th century tenement buildings razed to make room for it.

In many ways it was a great place to grow up. You could ride bicycles safely on the wide, car-less pavement within the project’s boundaries and roller skate with impunity. There were playgrounds and even a fountain, the development’s centerpiece, in an area called The Oval. As kids, we truly had freedom. But to me the chained in grass, the playground bars, the grounds patrolled by uniformed cops and countless rules made it feel like a middle-class prison. 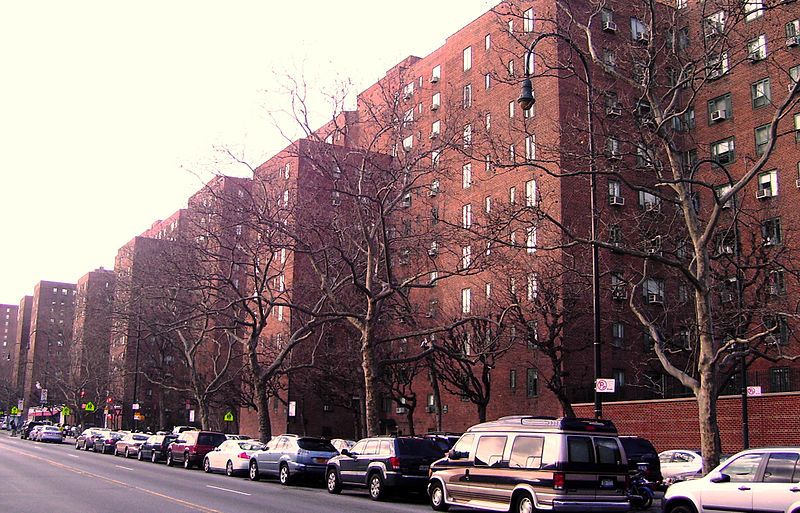 The surrounding neighborhood was vital and undergoing a dramatic transformation, following the Depression and the subsequent war.  The men were home, the women were back in the kitchen and American life would never be the same.

As a child, I remember seeing horse-drawn carts with the last of the rag-pickers and the gradual shift of the area south of us from Italian to Puerto Rican.  As I look back, I have many vintage memories of the East Village and the Lower East Side.

I went to PS 19 on First Avenue between 13th and 14th Streets. It was over 100 years old and downright spooky. Its main claim to fame: Abraham Lincoln spoke there. Walking to school each day, I passed the Italian butcher shop, carcasses hanging in the window, and the fish monger, the dead bodies of fish, heads and tails intact staring up at me from their bed of ice; a little daunting to a six year old. The Italian grocer on the corner, narrow and dark, redolent of those smells only an Italian grocery has: Parmesan cheese, olives, prosciutto and more; funky smelling to a young, untrained nose.

I remember the bodega where the Puerto Rican owner spoke no English and I stood with a nickel or dime in my grimy hand working hard to choose penny-candy from the glass case.  “Mira, mira,” we’d all shout, excitedly pointing to what we wanted that day. Then, task complete, walking out into the sunshine, extra bright after the darkness of the store, hands full and a smile on my face. Victory!  I’d have treasures: dots (those pastel half-circles of sugar pasted on a long strip of white paper), Smarties, miniature wax Coke bottles filled with dark syrup, red wax lips, candy cigarettes, Necco Wafers and more.

Billie poses with her cousin Doris near her apartment, circa 1950. (photo: Billie Frank)

Our new school opened when I was in fourth grade. It was two blocks farther south on First Avenue between 11th and 12th Streets; further into the unknown land that was the East Village.

Across the avenue, Lanza’s, an Italian restaurant, occupied the same spot since the 1920s. It seemed so old: small white octagonal tiles on the floor, wainscoting and mirrors and pictures of Italy on the wall, bent-wood chairs at the tables. It was a little more expensive than the other Italian places we went to, but my dad was sentimental about the place. He remembered eating dinner there for $0.85 during THE war. It was the first place I ate Veal Marsala. I remember the sensation of the buttery meat melting in my mouth.

The Italian ice place next-door was an important stop after dinner at Lanza’s or after school on a hot day. The soothing lemon ices, smooth and tart, were served in a pleated paper cup. You’d squish it to get the ices to come up where they could be licked, I can still feel and taste them on my tongue. Lanza's Restaurant is still operating in the East Village, although its prices have increased considerably since Billie's childhood. (photo: L Koch)

I remember the Tompkins Square Library on 10th Street between Avenues A and B where my first picture books came from; books I would later read to my son: The Little Red Lighthouse, Bartholomew Cubbins and The 500 Hats; later William Saroyan’s The Human Comedy and A Tree Grows in Brooklyn.

The free treasures within this two-story building shaped who I am today. A life-long love of books was born here, passed on to me and nurtured by my mother.  Books were the family legacy. My grandfather, a fixture in the used bookstores on 4th Avenue, would buy books rather than food for his family. I, in turn,  have passed this on to my son who is passing it on to his. Memories come fast and furious: afternoons spent riding the red Avenue B bus to the Henry Street Settlement for dance classes and the Third Street Music School for piano lessons; egg creams at Gem’s Spa on St. Mark’s place; dairy at Ratners.  I saw my first off-Broadway musical, Once Upon a Mattress, at the Phoenix Theater on 2nd Avenue and 12th Street starring a virtually unknown Carol Burnett. I remember occasional Sunday forays to Orchard Street on the Lower East Side with my father and my Uncle Max who owned a dry-cleaning store. He’d need supplies (thread, lining or suit goods) for Alessandro, his Italian tailor, who had to be taught to put zippers in trousers. He made my dad a pair with buttons.

There was a hustle and bustle here. It was a life different than the protected one of the middle-class prison we called home. The best part of these outings was getting to pick a kosher dill pickle straight from the barrel.  If I was really lucky; the day would include a trip to Katz’s Deli (immortalized many years later in When Harry Met Sally), for a hot dog with sauerkraut and mustard and an order of their crispy French Fries. Katz's Deli is a popular stop for tour groups and is mentioned in many guide books. (photo: L Koch)

The Lower East Side was the southern boundary of my life until I left home for college. If I went back to this gentrified piece of real estate today, I probably wouldn’t know where I was. As a great writer once said, “You can’t go home again.” But, maybe you can; I just did for a moment.

Billie Frank was born and raised in New York City but now calls the American West home. She has been a concierge at fine hotels and owns The Santa Fe Traveler, a travel-concierge, trip-planning business and tour.