If you’ve always dreamed of wielding a massive sword, scythe, hammer or gun, then you need to get yourself to NY Comic Con. It’s a safe place to interact with weaponry that could only be dreamed up in comics, anime, films or TV.

New York-area cosplayers have an impressive ability to shape EVA foam, pizza boxes and Nerf guns into weapons that can only be described as badass. Read on for the biggest, baddest weapons I spotted on the convention floor during my Thursday visit to NY Comic Con.

For more photos, check out my 2012 article about impressive cosplay weapons! 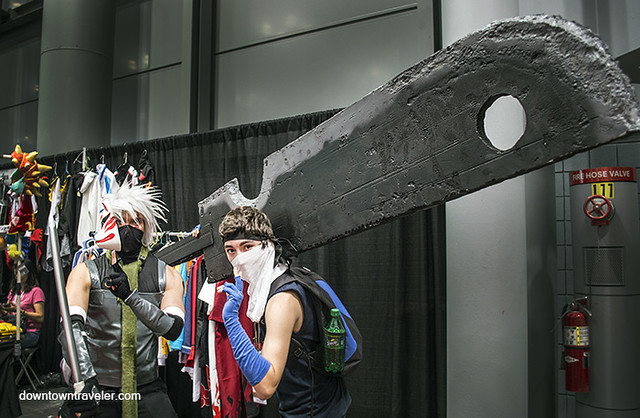 The Japanese manga Naruto is the source of NY Comic Con’s largest weaponry. This giant sword accompanied the character Zabuza and was made of foam, making it lightweight (if not easy to carry around a crowded convention hall). 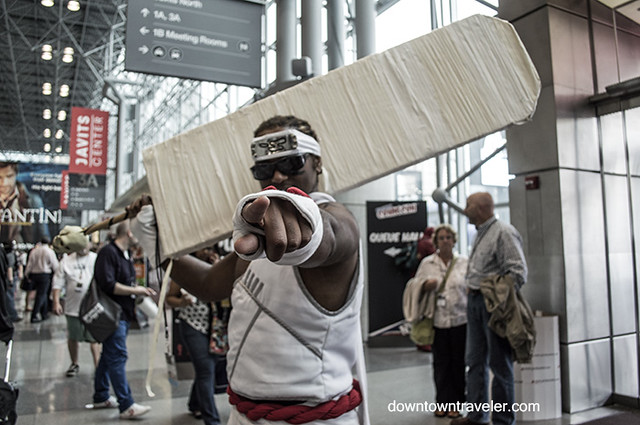 This massive white paddle was wielded by the character Killer B from Naruto. 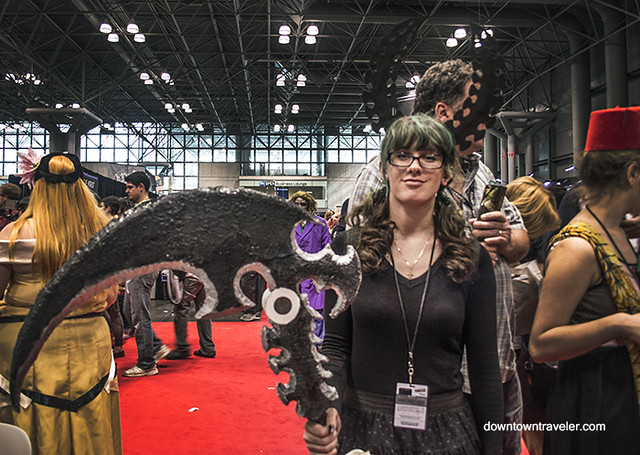 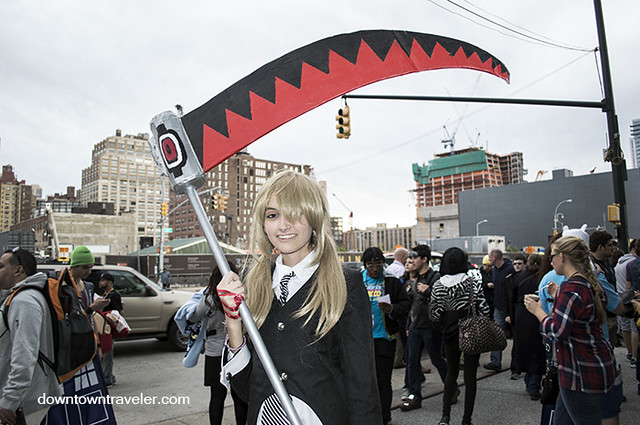 Maka from Soul Eater was another popular costume at the 2014 NY Comic Con. The look includes a giant demon scythe, which is considered Maka’s partner and bears the name of the series, Soul Eater. The version shown above took 2 months to make from PVC and cardboard. 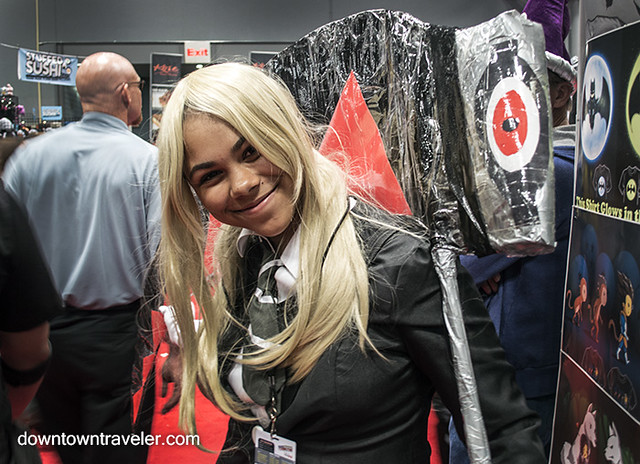 Another variation on the scythe included a glossy coating that looked suspiciously like cling wrap or clear packing tape.

Rocket Raccoon from Guardians of the Galaxy 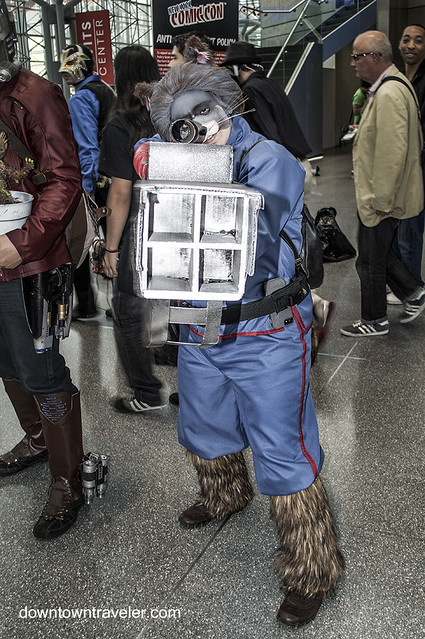 With Guardians of the Galaxy costumes taking off at this year’s NY Comic Con, there were multiple takes on surly character Rocket Raccoon. This woman carried a giant gun modeled off of the movie version, which was created using hand-cut cardboard, plastic and a hot glue gun. It took over 80 hours to complete. 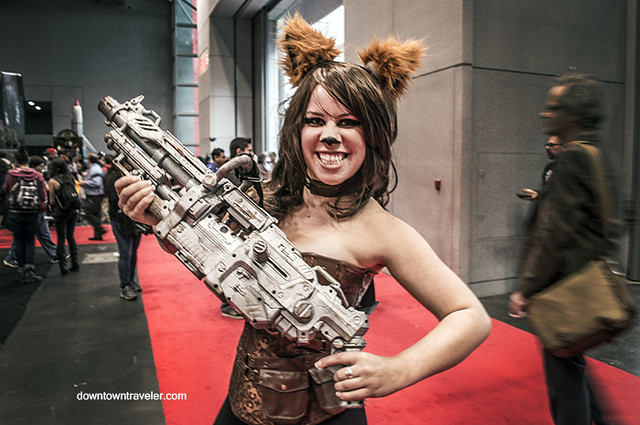 This Rocket Raccoon weapon is actually a Nerf gun, carefully painted to look like a real weapon. Let’s hope she didn’t wave this in front of any cops outside of the Javits Center! 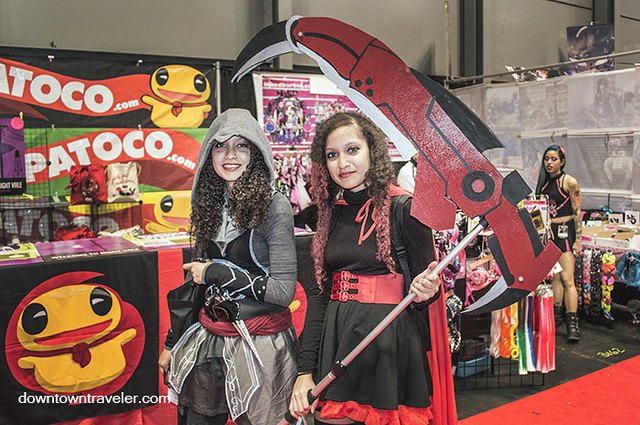 The animated web series Rwby inspired young women to create monstrously large scythes. This hybrid weapon, which is also a rifle, is known as Crescent Rose. The girl dressed in red in the above photo (pictured with her twin sister) got some help from her dad in carving the scythe from a wood door and attaching it to the handle of a paint roller. It features moving parts and is a true feat of DIY weaponry. 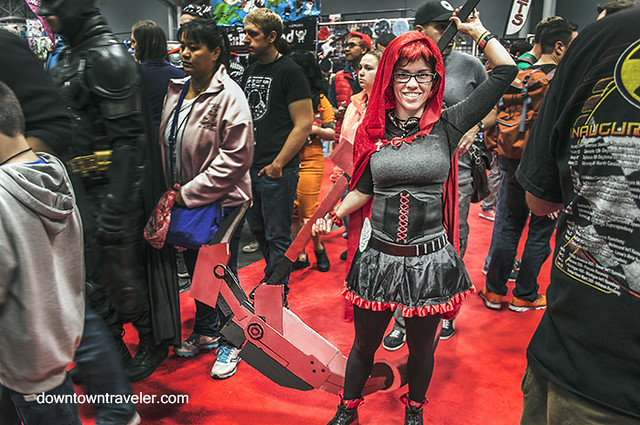 Another Rwby fan created her scythe from a pizza box, which she painted red and black. Massive in size, it was challenging to photograph in a single frame!

And Another Red Sword… 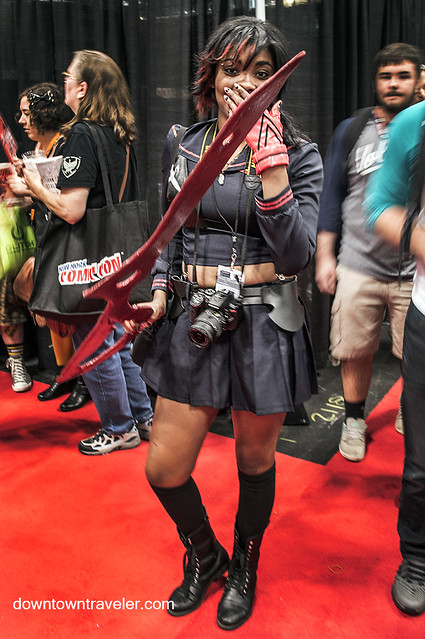 This fangirl wielded a painted wooden sword crafted by a friend who accompanied her to the convention. I didn’t get many details about the weapon , since she spotted another cosplayer dressed as a favorite character and ran over to take photos. If you can identify this costume and weapon, please leave a comment below!

>> UPDATE: Thanks to reader tips, we can now identify this weapon as Ryuko’s Scissor Blade from the anime Kill la Kill! 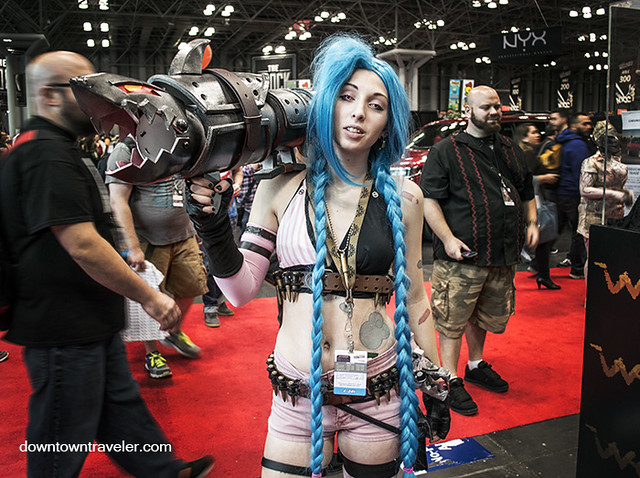 League of Legends is another source of insane weaponry. As the photo above proves, not every badass weapon at NYCC is homemade. This woman purchased a massive gun online to go along with her Jinx costume, after deciding it was too complicated to make herself. The weapon was still impressive, especially the shark-like teeth at the end of the gun. Yikes! 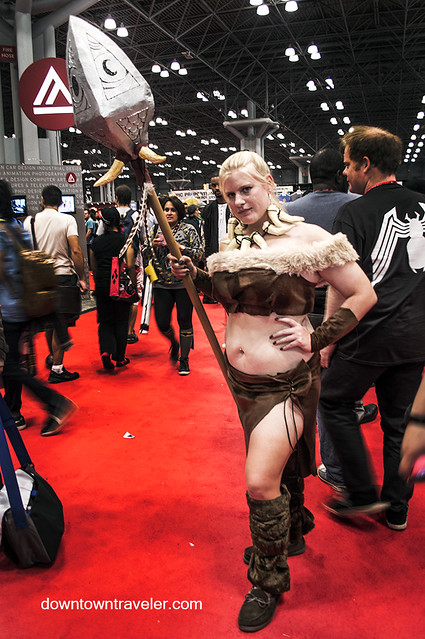 A staff completed this woman’s Nidalee “The Bestial Huntress” costume from League of Legends. 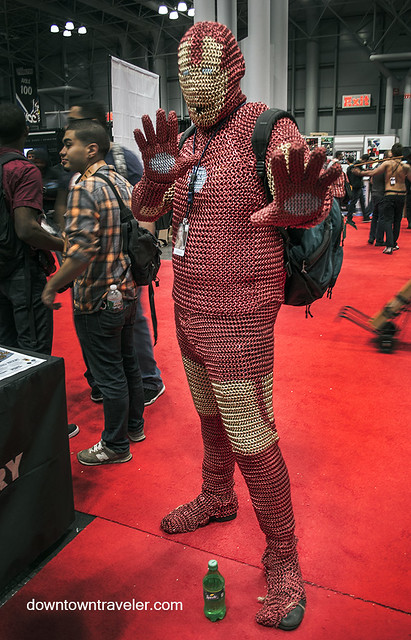 Chain mail may not have the glamor of a giant scythe, but I consider it effective weaponry so am including it on this list! This is homemade chain mail that has been fashioned into an Iron Man costume using over 120 hours of labor. That’s what you call dedication to a costume! This man also made his pregnant companion a matching chain mail vest. 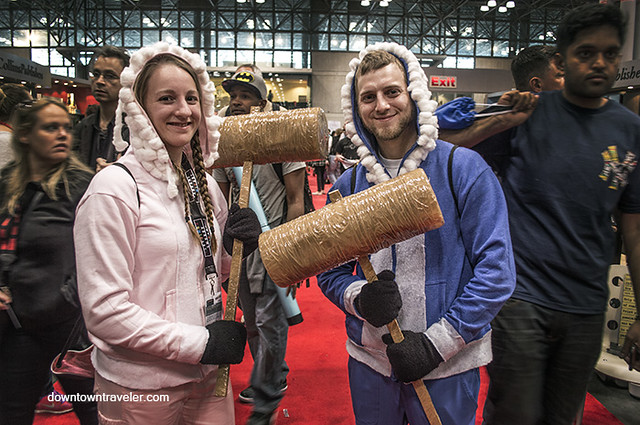 You don’t need to go through a gallon of silver spray paint to make an awesome cosplay weapon. This duo, dressed as the ice climbers from the Super Smash Brothers video game, created their mallets out of wood dowels and jugs of Poland Spring water secured with packing tape. 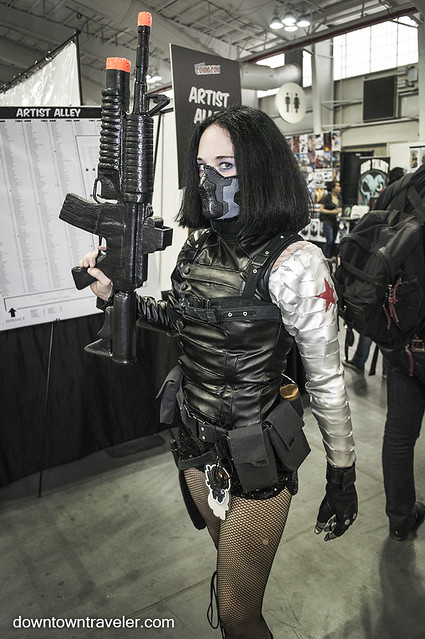 This gun looked so detailed I thought it must be a toy gun painted black for NY Comic Con– but it was actually handcrafted from paper mache and foam. It was incredibly lightweight, making it relatively easy to carry around the convention floor. 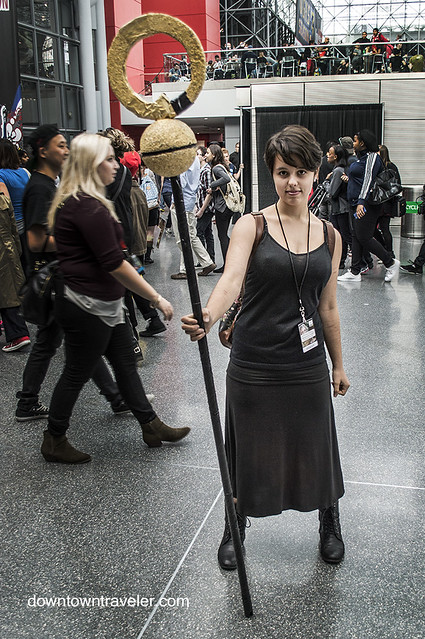 Sometimes a weapon is an integral part of a costume. The magical staff identifies this woman as Nico Minoru from the Marvel comic Runaways. She crafted the weapon, known as the Staff of One, herself. 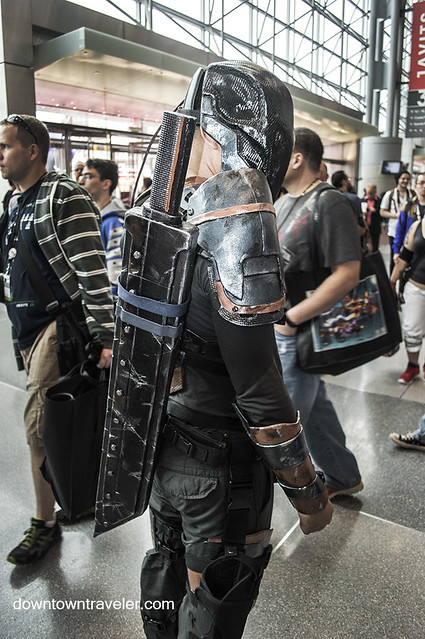 Batman costumes are incredibly popular with children (see our NYCC kids costume photos) and adults alike, but grown-up fans tend to accessorize with scarier weapons. The man above made this awesome DIY sword in a single day from EVA foam. When I interviewed him about the costume, I heard the character name as Deathstone–  although I haven’t seen any online references to Deathstone in the Batman universe. If you know the correct name of this character, please leave a comment below!

>> UPDATE! Thanks to reader tips, we can now identify this character as Deathstroke (aka Slade Joseph Wilson), nemesis of Batman and Green Arrow! 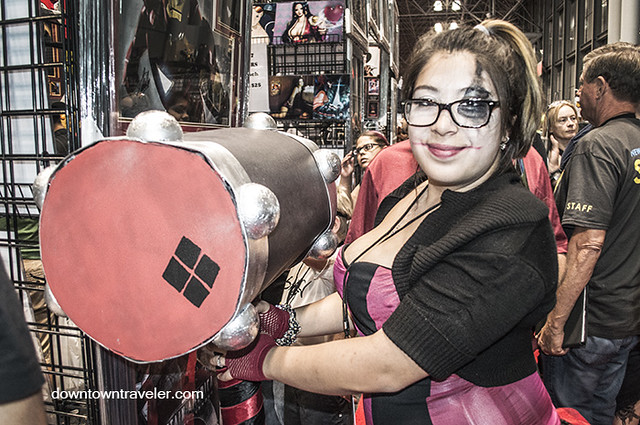 Harley Quinn is consistently one of the top women’s costumes at NY Comic Con, and I went through a bit of Harley fatigue this year. I only stopped to photograph one example of the costume, after being drawn in by this impressive weapon. This DIY version of Harley’s hammer was created from foam and poster board, and ribbon was used to decorate the handle. If you are looking to create your own Harley Quinn hammer, there are tons of online tutorials.

Krieg the Psycho from Borderlands 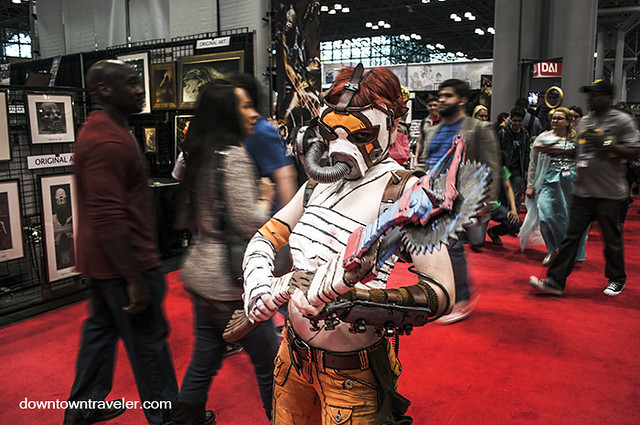 This woman made a super-intimidating buzz axe out of foam to complete her Krieg the Psycho costume from the video game Borderlands. It took two full months to complete. 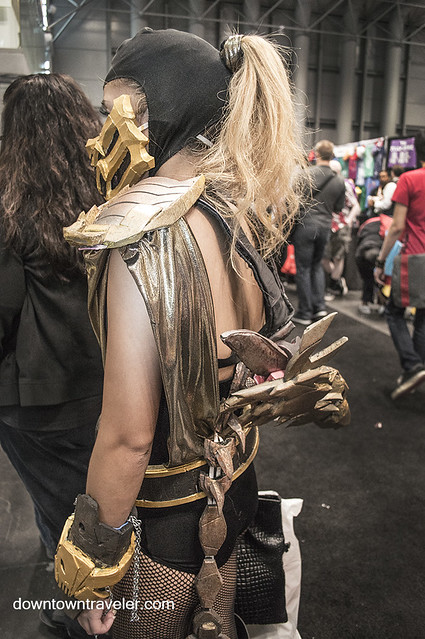 Attending NY Comic Con while pregnant does have some advantages– like spotting amazing costumes during frequent trips to the bathroom line! That’s where I noticed this fangirl, who spent a couple of days crafting a styrofoam sword for her costume, Scorpion from Mortal Kombat.

Link from The Legend of Zelda 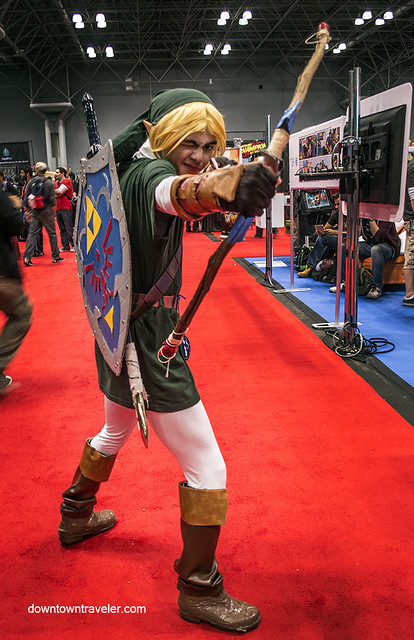 Bow-and-arrow sets seem to be making inroads at NY Comic Con. That’s a fortunate development for cosplayers with limited time and money, since you only need a tree branch and piece of twine to pull off the look! This fanboy was dressed as Link from The Legend of Zelda. 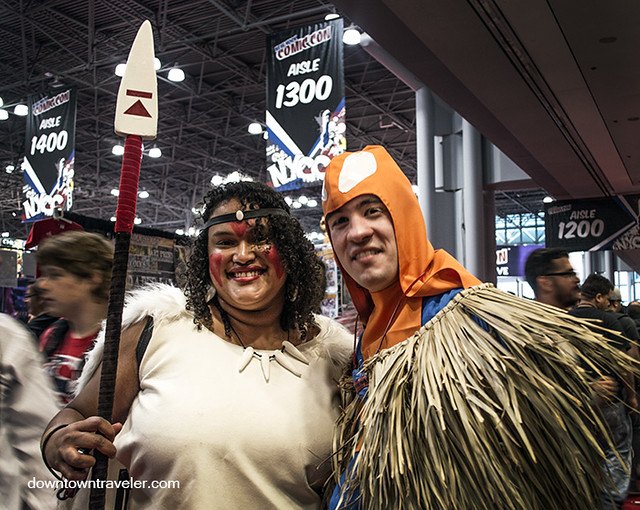 What’s your favorite weapon from comics or anime?

Share your opinion by leaving a comment below! For more NYCC coverage, check out these posts on Women’s Costume Trends and Creative Kid’s Costumes.