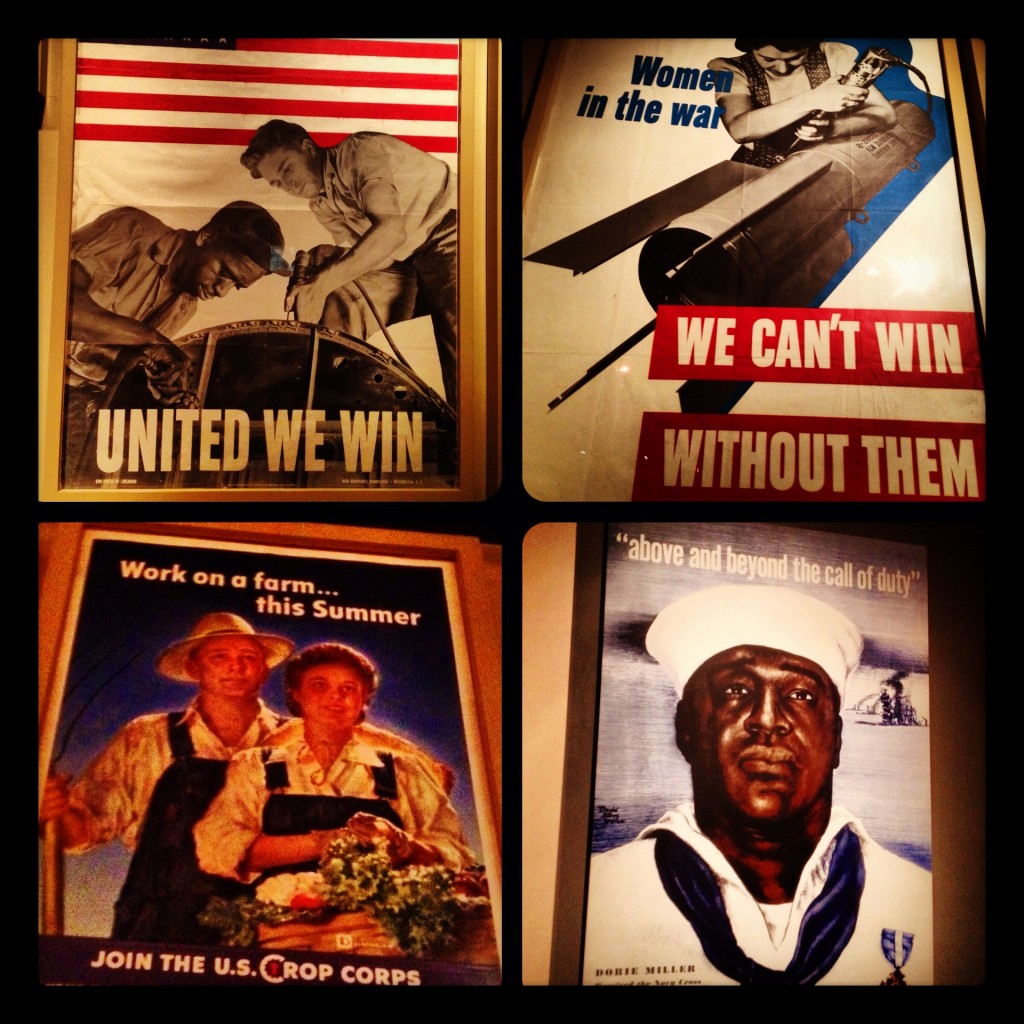 I was skeptical when a coworker told me I absolutely had to visit the National World War II Museum during my vacation in New Orleans. To be honest, I was surprised a social media-savvy woman in her early 30s was interested in a war that ended nearly 70 years ago.

But I trusted her recommendation and I’m glad I did! My visit to the National World War II Museum was a highlight of my trip to New Orleans. Housed in a modern building (opened in 2000), the museum is packed with photos, clothing, weapons, tanks, airplanes and propaganda posters from the 1940s. The museum celebrates veterans and makes a special effort to showcase stories of individual soldiers, even offering free admission for WWII vets. On the day we visited, a WWII paratrooper was on hand to talk to visitors about his experience. We also spotted a binder in the main hall filled with handwritten notes from veterans and a sign that asked visitors to share their experiences about a particular mission. As you’d expect from a museum founded by a historian– author Stephen Ambrose– the National World War II Museum offers a thorough look at life in the armed forces and back in the US during the war years.

The museum recommends blocking out 3 hours for a visit but that barely gave us enough time to scratch the surface. If we didn’t have a dinner reservation, we could have spent an entire day at the complex (which allows re-entry).

We spent an hour alone at the POW exhibit, which featured telegrams notifying families about missing soldiers, prisoner drawings showing life in a German POW camp, and detailed information about the Geneva Convention and Red Cross (which the Nazis allowed into camps to distribute care packages).

I’m not a huge car or airplane junkie so I sped past the tanks and bombers in the main hall, but I spent a good chunk of time examining every artifact in the homefront and D-Day exhibits. I was fascinated by the American WWII posters, which celebrated women who worked in factories (although they were later squeezed out of the work force when the men returned) and seemed to encourage racial integration in the workplace (although the US military was segregated during the war). One poster even suggested Americans take up farming during their summer breaks. My grandfather and an uncle both served in World War II but aside from a few colorful stories, I didn’t know much about their military service. I never had the chance to speak with them about their experiences before they passed away– although I’m not sure they would be eager to relive the memories.

I found the exhibits so intriguing that I texted my mother from the museum to ask her what campaigns our family members served in. Knowing that my grandfather commanded a small ship in the South Pacific (which never saw action) and that my uncle was a medic during the march on Rome, I felt more invested in the exhibits. I could picture my uncle wearing the khaki uniform and mess kit shown in a display but could only imagine what he saw on the front lines.

“Beyond All Boundaries” Film A trip to the National World War II Museum wouldn’t be complete without seeing the film Beyond All Boundaries, which was created specifically for the museum. Narrated by Tom Hanks and featuring the voices of top actors, this “4D” movie is punctuated by explosive sound effects, smoke machines and dizzying lighting that simulate an atomic bomb.

I enjoyed the film and found it informative; for example, I hadn’t realized that China suffered the most casualties by far of any nation in WWII. While the narrative is clearly told from an American point of view and emphasizes the sacrifice of US soldiers, the human toll of the war– including the many victims of US firebombings and nuclear attacks on Japan– is mentioned.

Tickets to the 45-minute film can be purchased when you pay your admission fee and provide access to a timed showing. Although the movie is screened several times a day, there was already a long line when we arrived at the theater ten minutes early. This actually worked to our favor, since after being led into a waiting room to watch a brief introduction to the film, we ended up standing right next to one of the two theater entrances.

The National World War II Museum is a worthy stop on any visit to New Orleans. Whether you have a relative who served in the war or just want to learn more about a pivotal event in American history, you will be intrigued by the exhibits showing life on the front lines. Make sure to pay the extra $5 to screen Beyond All Bloundaries, which provides a good overview of the war. I’d recommend blocking out at least 4 hours for your visit, including lunch at a nearby cafe or the pricey museum restaurants.

The National World War II Museum
945 Magazine Street New Orleans, LA 70130
Phone: (504) 528-1944
Cost: Museum admission is $22 for adults, $19 for seniors, $13 for children, students and military, and FREE for WWII veterans. Pay an additional $5 to see the original film Beyond All Boundaries.
For more info: Visit the WWII Museum website and check their Facebook and Twitter (@WWIIMuseum) pages for the latest events and exhibits.

Note: We received two tickets to the National WWII Museum and Beyond all Boundaries film in order to write this review. As always, all opinions are our own.

Have you been to the National WWII Museum?

previous post Forget Paris! Why UK getaways are just as romantic
next post Top 5 ways to travel in Turkey without renting a car