New Yorkers, get ready to face your fears.

Now in its 11th season, Nightmare haunted house stays fresh by embracing a new theme each year. The 2014 haunt, New York, pays tribute to the city’s dark past and chilling present, blending legendary horror stories and urban legends into a fearsome experience.

My Nightmare journey began while waiting to enter the house in a room displaying some of New York’s spooky history, including references to infamous serial killer Andre Rand (known as the evil incarnation of the mythological Cropsey legend), Typhoid Mary and another notorious murderer, David Berkowitz. (Keeping with the 2013 theme, Killers 2, you’ll still encounter a fair share of serial killers in the 2014 haunt).

Before I entered the house, Nightmare’s staff asked visitors if they wanted an ‘X’ smeared on their foreheads, suggesting that this would amplify the experience. Having read Downtown Traveler’s 2013 review of Nightmare haunted house, I knew this meant allowing actors to touch you during the tour. I was thankful when another staff member clarified this after seeing some puzzled faces. It is definitely important to let visitors know what they are saying yes to, since some might not be too thrilled about getting touched!

Like everyone in my group, I opted for the ‘X’ and prepared to enter through doors covered by the graffiti message “Welcome To Hell”.

>> SPOILER ALERT! The following review contains a walk-through description of Nightmare: New York haunted house, including information on characters and set design. If you want to be 100% surprised by this year’s show, scroll down to the “Details” section. 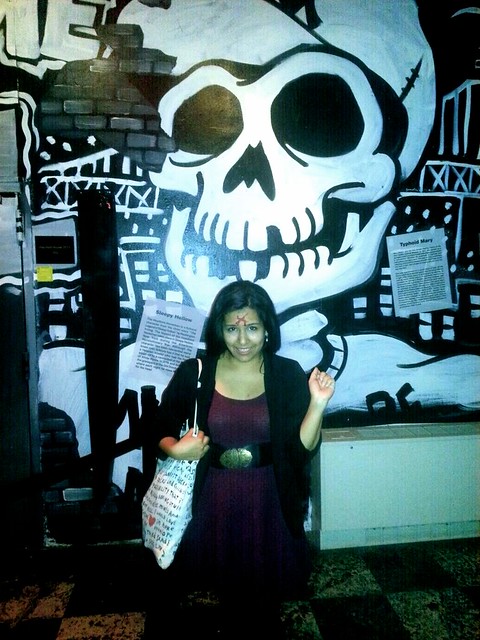 Upon entering the house, actors appeared from the dark to taunt and scream at us. Two visitors were immediately singled out for additional attention and whisked away.

As we walked through sets showing New York City street life, I almost felt like I was still in my daily reality.

Walking past some sketchy rooms, one character asked for  spare change and began to lose it when he didn’t receive any. This scene was followed by a 1980s subway train car, which was so perfectly designed I almost forgot it wasn’t real. The train car was covered in graffiti and filth, with typical underground travel noise including a passenger mumbling to himself. Not long after we entered, the passenger broke out in full hysteria—which isn’t too different from my late night commutes home. Still, it startled all of us and we made a quick exit.

Having these near-reality experiences certainly played with my mind, and I had to keep reminding myself this surreal New York backdrop was only a performance. Thankfully a large alligator popped out of nowhere outside of the train cart, and I was able to laugh it off, because there is no way they could exist in NY…right?

I recommend opting for the ‘X’ option as it adds an extra element to your Nightmare experience. Just remember it is a performance and no true harm will come to you— so let down your guard and get in the Halloween spirit!

Characters touched my hair and shoulders, poked and startled me as I was walked through the sets. They reached out for my group in pitch-black rooms, causing us all to jump and feel paranoid about what could come next. At one point I grabbed on to the shoulders of a stranger in my group who thankfully told me ‘it was ok’—not my bravest moment.

In one particularly creepy hospital scene filled with ill patients lying in their beds, a character screamed and insisted that she wasn’t sick, yet moments later she expelled (simulated) bodily fluids that fell onto my arms. I cannot describe the look of disgust I must have had on my face, but they got me good.

We were given time in each room to fully experience every individual performance, and there were great transitions between stories to keep the experience scary and entertaining.

Each room in Nightmare was unpredictable. I never knew what to expect next– from a roach-infested apartment and rat-filled dumpsters, to lines of pigeons sitting directly overhead. You will be startled by each New York City horror.

But nothing prepared me to be ordered into an empty parking lot and to have a cloth bag pulled over my head. My group had to blindly follow a rope, making our way back into the house through a maze with disturbances all around us. This was one plot twist I never anticipated! 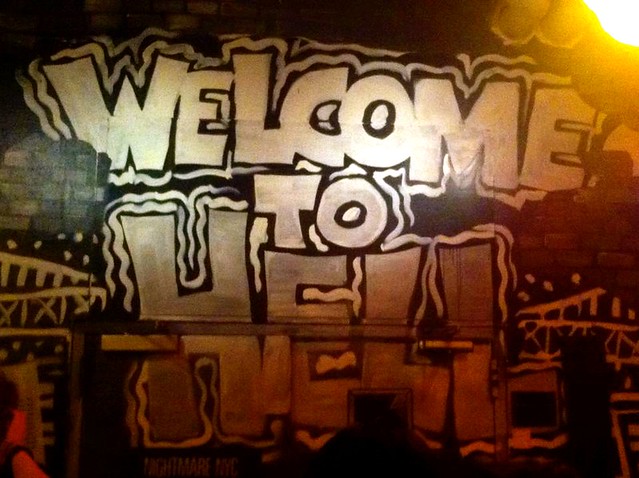 The gates of "Hell" at Nightmare haunted house

Nightmare is a thrilling, chilling haunted house experience. They sure know what scares the average New Yorker, so make sure to remember this isn’t reality— although the scenes displayed aren’t too different from the gritty streets of New York City.

This review was written by Downtown Traveler contributor Claudia Oddo, a New Yorker experiencing the city’s haunted house circuit for this first time.