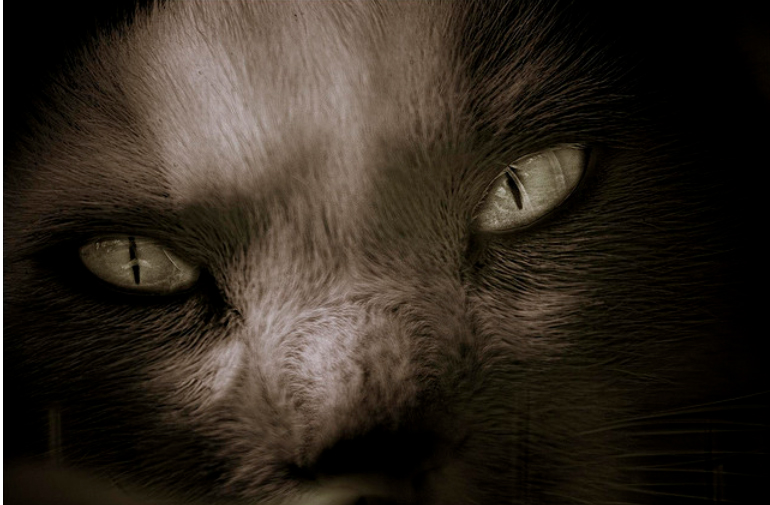 Surely only a deranged individual could come up with a haunted house that makes you sign a liability waiver, gives you a “safety word” and forces you to go through alone…

Or, in the case of Blackout Haunted House, it takes a creative graduate of NYU with a background in theater and a passion for horror movies.

Josh Randall founded Blackout’s New York City haunted house in 2009 with his partner Kris Thorgeirsson and has since expanded the show to include a Los Angeles outpost. Blackout has attained cult-like status among horror junkies, who police the Web for spoilers and help spread the word about this seriously-scary Halloween attraction.

After writing a review of the Blackout Haunted House I was barraged by questions from readers, like What does it mean by sexually explicit? and Is it sanitary? I decided to go straight to the source and asked co-creator Josh Randall to shed light on Blackout.

Josh graciously agreed to take Downtown Traveler readers inside the secretive world of Blackout. Read on for his inspiration, reaction to critics and top advice to those who are scared of taking the plunge. And don’t forget to visit Blackout before its run ends on November 4, 2012. Q: Josh, you mentioned during a radio interview with Carson Daly that you started working with Kris Thorgeirsson four years ago to create a haunted house that would “illicit a genuine fear response.” How do you measure your success? Is there an ideal reaction from visitors (screaming, fainting, shouting the safety word) that tells you you’ve achieved your goal?

A: Our goal is to have an effect on audience members and any sort of effect is greatly appreciated. Fear is subjective so everyone responds differently and we’ve come to accept the fact that any sort of reaction is a positive indicator that we did our jobs well. Some people come out crying, some laughing. Some are dripping in sweat and run out the door, and others come out cheering and high-fiving their friends. The ideal reaction is any reaction at all.

Q: What’s the wildest reaction you’ve seen from a visitor to Blackout? Do you have a favorite or memorable moment?

A: We’ve seen everything. Panic attacks, seizures, crying fits, laughing fits, etc. One of my personal favorites was a very tiny woman who went through in 2009 and had such a strong panic attack that she curled into a ball sobbing and couldn’t move. We had to pick her up as she lay in a ball and pull her out of the house until she calmed down.

Q: What are the biggest challenges to putting on a show like this in New York City? How many cast and crew members do you work with to pull it off?

A. The challenges are many and they are intense. Generally staffing and location are the most difficult elements and after that, everything falls into place. We have a large staff and crew that work very hard to make it all happen but we won’t ever reveal how many actors are inside, it ruins the illusion. 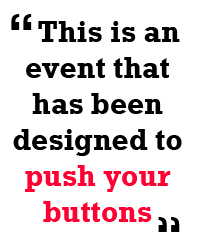 Q: What was your inspiration for this year’s Blackout haunted house? Did specific films, artists or even real-life events influence you?

A: We have no specific inspiration that played into this year’s house except for the multitude of influences that effect both Kris and I on any given day. We both love horror movies and are constantly watching as many as we can. We also read a lot into the psychology of fear and what certain factors play the most important role in triggering that response from someone. The film director Michael Haneke, Demme’s “The Silence of the Lambs” and the French movie “Martyrs” were all very strong influences over the course of the year although there are no real direct references to them in the house (well, maybe a couple).

Q: Fans of Blackout are fanatics about guarding the details of your show, but are prone to posting super-detailed reviews at the end of the Halloween run. Do you read visitor comments on Yelp, Twitter, Facebook and blogs? And do you make adjustments or get ideas for next year’s show based in this feedback? Given the amount of activity on your Facebook page, it must be hard to ignore!

A: We definitely stay on top of what everyone is saying, however, as creators and artists, there’s only so much you can do about those comments. Kris and I strive to create something we are proud of and something we want to stand behind. Of course we strive for our audience’s approval but as artists, you have to do what you have to do. We definitely look to those comments from fans as indicators of what’s working and what’s not, but its rare that we will change something we feel strongly about just because there are comments about it.

Q: Why is it so important that visitors go through alone?

A: That’s everything. It sets us apart from everyone else but most importantly, it’s the single most important element of Blackout. The fear factor increases when you’re by yourself and brings everything to a completely new level.

Q: Going through Blackout Haunted House, I was gripped with fear but also struck by how vulnerable these performers are. In various states of undress, they are often alone in a closed room with visitors who don’t undergo any background checks. How do you ensure the safety of your performers? Does this keep you up at night?

A: Behind the scenes, safety is the most important part of Blackout. We wouldn’t be able to do what we do without everyone, actors and audience member, remaining safe. We have several protocols and safety measures in place to make sure everyone remains unharmed and able to do their job. But yes, it does keep me up at night. 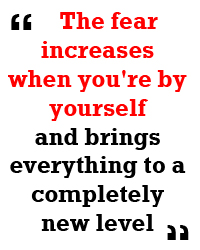 Q: When I posted my review of the 2012 Blackout Haunted House, a reader asked about sanitation. She had read about the “water boarding” last year and asked if you changed the plastic bags for each visitor. First, did you? And second, are there health codes for haunted houses? Does a city inspector in gloves ever stop by to check you out?

A: We won’t answer questions about how we do what we do, and certainly not a question as specific as that. Having said that, the experience is safe and sanitary and that’s all we’ll say about that. But yes, everything in NYC is tightly controlled and we work very hard with all city officials to make sure we’re providing a safe and effective event.

Q: Recently, a writer for XOJane who had never visited Blackout criticized the show. She wrote, “I’m not entirely comfortable with the idea that simulated sexual assault and torture should be marketed as entertainment.” Blackout seemed to encourage this debate by posting a link to the story to its Facebook page. How do you react to this controversy? And do you think the show ever steps over the line and promotes sexual violence?

A: The controversy is what Blackout is all about. Fear is subjective. Some people find Blackout to be the most powerful thing they’ve ever done. Some people think it’s hysterical. Some find it dumb. Some find it offensive. We’re here to create a reaction out of people and we’re happy to hear people talking about it. In that particular case, the writer was making judgements and comments on something she had never experienced which is ridiculous to me so we don’t mind pushing her to the front of the line and letting our fans expose her hypocrisy and judgmental feelings about the whole thing. There are thousands of women that would disagree with her and our hope is that they speak up so someone who has no real knowledge of the event isn’t allowed to make judgements on people who are educated and know the deal. Thankfully, our fans stepped up and argued their point on her website.

And I definitely do not think we step over the line and promote sexual violence. That’s absurd and I’m not entirely sure how someone who’s been through can actually make that argument. This was something someone asked us last year during an interview that I had a tough time answering at the time. But ultimately, it’s a not a particularly valid argument. Blackout is not for everyone and we do our best to try and let people know what they’re getting into. If they choose to not read the rules and waiver (which most people do not, they think it’s a joke) then that’s not our fault. If you’ve been traumatized, victimized, and otherwise have post traumatic stress issues, then Blackout is absolutely not for you. And if you choose to put yourself through that, then you need to deal with the consequences of that decision.

Q: What’s the best advice you can offer someone who wants to check out Blackout, but is scared by the walkthroughs and media reviews?

A: This is an event that has been designed to push your buttons. You’re not going to get hurt or sexually abused when you go inside, so don’t believe everything you read. With that said, it’s super intense and if you’re looking for an experience that will be like nothing you’ve ever experienced before, than this is for you. And most importantly, stop reading spoilers and reviews – it’s guaranteed that what you’re reading won’t happen to you, so whatever you think is going to happen, won’t. So be brave and get a ticket. Experience it for yourself and make your own decisions.

To buy tickets to the New York or Los Angeles haunts, visit the Blackout Haunted House website. To get excited for the show (without coming across spoilers), check out Blackout’s Facebook page and Twitter feed (@nychauntedhouse).

So… are YOU brave enough to visit Blackout?

previous post PHOTOS: 25 badass costumes and weapons at NY Comic Con 2012
next post PHOTOS: Life in the East Village during Hurricane Sandy and the blackout