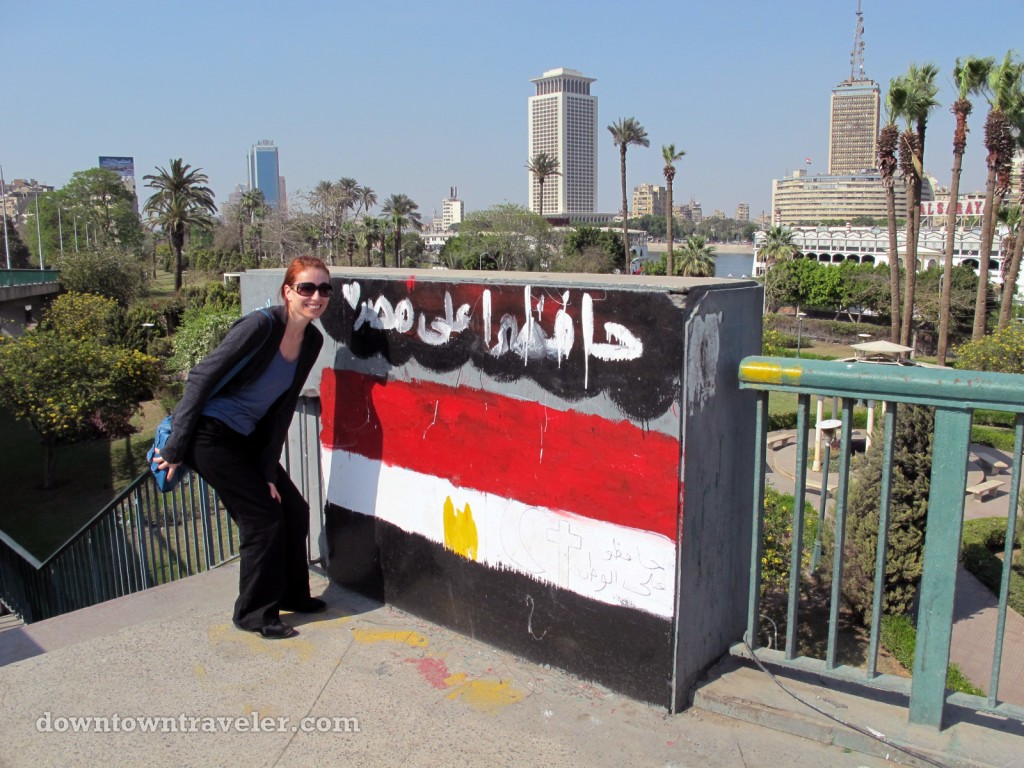 This is the latest in a series of reports on the “Restoring the Journey” trip that brought US tourism leaders to Egypt and Jordan to experience safety conditions firsthand. I traveled with the delegation, which was sponsored by local tourism ministries. I ran into this Egyptian flag near Cairo's Qasr el-Nil bridge.

My visit to Cairo last week taught me three things about the Egyptian people: they’re optimistic about the future, they’re proud of the January 25th revolution, and they’ve embraced street art.

The red, white and black stripes of the Egyptian flag were splashed on walls across downtown Cairo, while the English phrase “Enjoy the Revolution” greeted visitors to Tahrir Square.

While I don’t read Arabic, I was fascinated by the artwork and wondered what it meant. Some of the murals were clearly revolutionary, but the meaning of other symbols was hard to decipher.

What do you think of Cairo’s street art scene? If you recognize the people and symbols shown, please chime in! A park in Cairo, located near several works of street art.

As I strolled down Cairo’s Nile River on a sunny Saturday afternoon, I passed perfectly-maintained gardens, couples flirting on benches and vendors selling soft drinks on giant blocks of ice. It was a pleasant scene that could play out in any city, and it was hard to believe a revolution had occurred here just a few months ago. The street art I encountered was one of the few signs of the 18-day uprising. The area across the Qasr el-Nil bridge from downtown Cairo was a hotbed of street art.

I was struck by the thoughtful expression of the man on this painted mural. On a wall with no other artwork– surrounded by impeccable gardens– this tribute seemed out of place. Across the street, a graffiti artist tagged “Game Over” on a concrete column. This image of two men was stenciled behind an elegant building with a tall minaret. It reminded me of the iconic image of Che, the Argentine revolutionary who fought in Cuba. However, these men had friendly expressions that bordered on sweet. Could they be victims of the revolution? An ankh and a crescent were spray painted on a nearby wall. I wondered if this could be the symbol of a political party. I ruled out the Muslim Brotherhood, since a Google search turned up a logo with swords. The combination of the ankh, an ancient Egyptian symbol, and the crescent, often associated with Islam, was intriguing.

>> UPDATE: This is a Christian cross, not an ankh, and is a symbol of religious unity in Egypt. When I visited Tahrir Square on Easter Sunday, it was calm and nearly empty. One of the few remnants of the revolution was this graffiti. It read, “Enjoy the Revolution.” After stopping by the Supreme Council of Antiquities in an upscale part of Cairo, our bus passed a wall plastered with murals. Several depicted the Egyptian flag, which had become a familiar sight. The murals stretched for an entire block. The murals didn’t appear to be created by the same artist, since the styles varied. I wondered if this building might be a school, and the murals a class project.