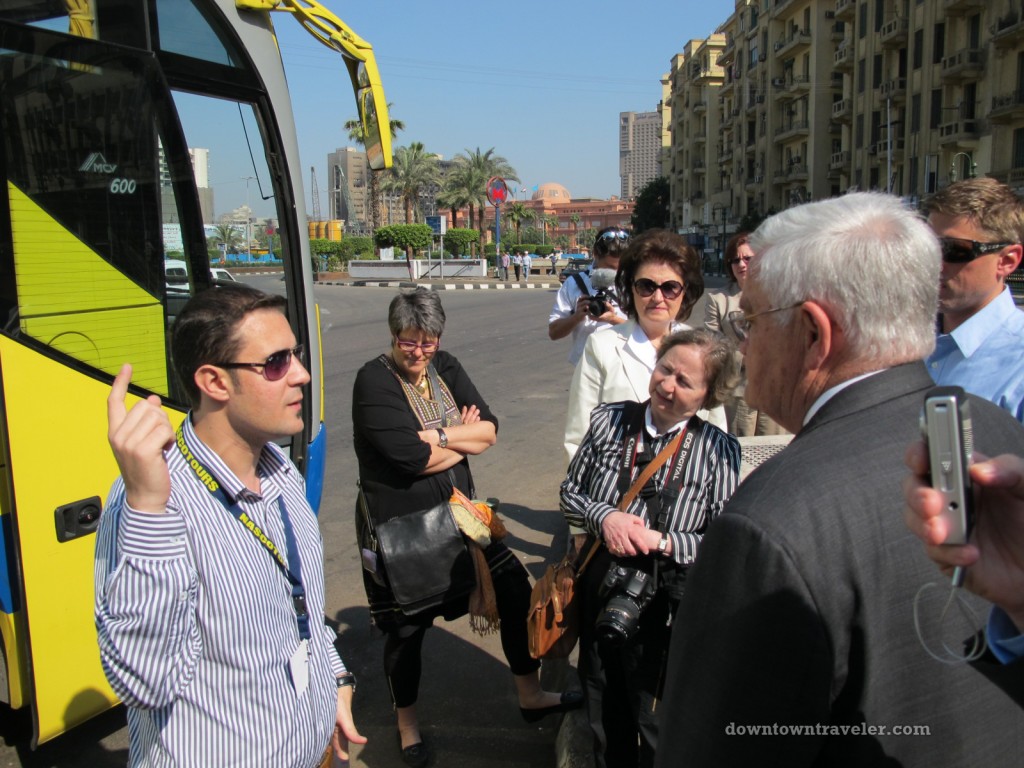 This is the latest in a series of reports on the “Restoring the Journey” trip that brought US tourism leaders to Egypt and Jordan to experience safety conditions firsthand. I traveled with the delegation, which was sponsored by local tourism ministries.

Political signs, protesters and perhaps an overturned car. That’s what I was expecting to find in Cairo’s Tahrir Square, the center of the Egyptian revolution, during a visit last Sunday.

When I stepped off the bus, I searched for signs of unrest. Aside from a few burned-out buildings, there was no indication that a million Egyptians had gathered in this spot and brought about a revolution.

Tahrir Square was downright peaceful last weekend– an oasis of flowers and greenery in the heart of Cairo. Prior to visiting Egypt, my knowledge of Tahrir Square came from news reports. The key takeaways from the media coverage in the US:

Once president Hosni Mubarak was ousted from power on Febraury 11, Tahrir Square seemed to fade from the news. I hadn’t seen any recent images of the square and assumed it would look like a war zone. My first glimpse of Tahrir Square came on Saturday, when our delegation of US tourism leaders was making its way from the Cairo airport to the Four Seasons hotel. We were in town to meet with Egyptian tourism officials and to investigate safety conditions for American travelers.

When I looked out the tour bus window, I saw dozens of Egyptians walking through the square. It was a warm, sunny day and they were enjoying a stroll with their friends and families. I didn’t spot a single political sign or protester.

It reminded me of Central Park in the spring (albeit a much smaller version). When we arrived at Tahrir Square on Sunday, April 24, tour guide Mina Mamdouh Edwar briefed our group on the 2011 Egyptian revolution. Our cameras and iPhones were out, and we began snapping photos of the landmark.

Since it was Easter Sunday (part of a holiday weekend in Egypt), traffic was light and we didn’t see many people on the square. We walked around the neighborhood with cameras out, not giving a second thought to safety.

A private security guard accompanied us on the tour bus. Mustachioed and clad in a brown suit, he was clearly wearing a gun underneath his jacket. It’s standard procedure for tour groups in Egypt to have a guard, we were told.  He stayed by the bus throughout our visit to Tahrir Square.

It’s worth noting that the previous day I walked around Cairo’s riverfront with fellow travelers– without a guard– and felt entirely safe.

Update 9/10/11: As the political situation in Egypt continues to evolve, make sure to check the State Department website for country-specific information before booking your vacation. Essentially a traffic circle, Tahrir Square is a short walk from the Egyptian Museum, the US Embassy and the American University in Cairo. Our group posed for photos on the lawn, which had been re-sodded the prior week.

Tahrir Square is being developed as a tourist attraction, we learned during meetings with Egyptian officials. While there are no concrete plans for the site, possible attractions include a revolution-themed museum and a photo gallery. During our morning visit to Tahrir Square, a number of police officers in white uniforms appeared near the tour bus and spoke to our security guard.

Later that day at a meeting with Ambassador Margaret Scobey, we learned that the Egyptian police have gradually returned to their posts following the revolution.

According to the ambassador, the police have gone to “charm school” and are trying to improve their image. While Tahrir Square was peaceful on Sunday, there were a few remnants of the revolution that gripped Cairo in January and February. Several buildings in the area were burned, including Mubarak’s National Democratic Party headquarters. Graffiti was splashed across the side of a building near the square. The message read, “Enjoy the revolution.” While standing in the traffic circle, I spotted the Kentucky Fried Chicken mentioned in news reports. During the revolution, the fast food restaurant served as a makeshift medical clinic. It was closed when we visited, presumably for the holiday weekend.

The Egyptians we met took pride in the revolution and were eager to have tourists return. After speaking to locals, we discovered that the tidy appearance of Tahrir Square is no accident. Ordinary Egyptians cleaned up the area after the protests. Egyptians clean up Tahrir Square after the revolution. (Photo: Sierragoddess/Flickr)

The day after our Tahrir Square visit we met a female guide, Radwa Tarek Ahmed, who helped clean up the square.

At her fiance’s request, Radwa did not attend the demonstrations but she joined the community cleanup after Mubarak was removed from office.

On February 12, Egyptians came to the square with dust pans, brooms and trash bags; some wore signs reading, “Sorry for Disturbance. We build Egypt.”