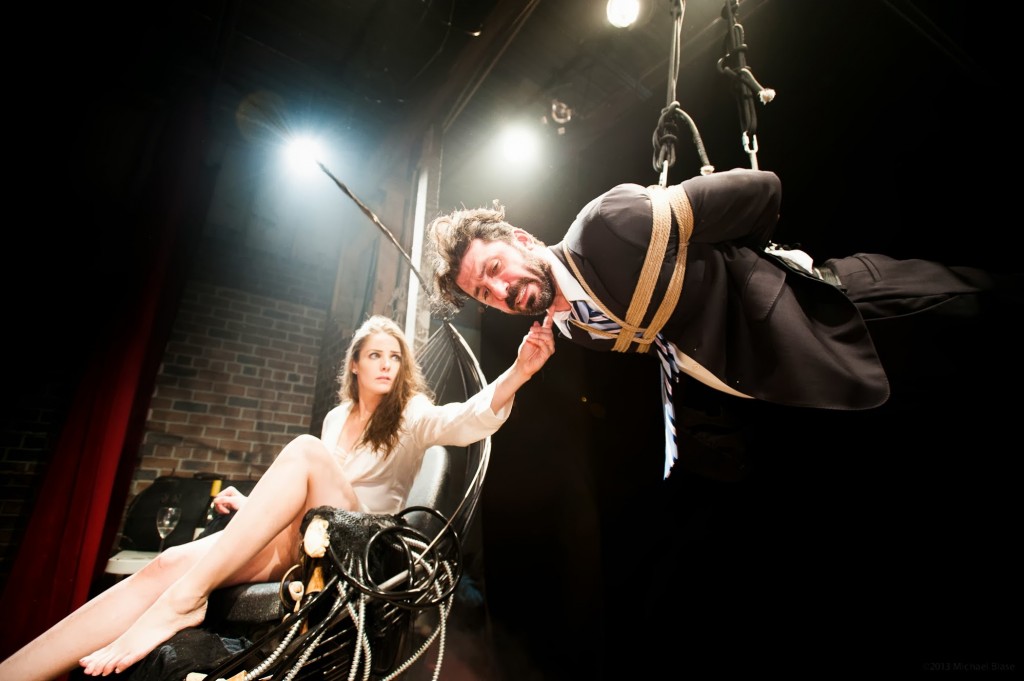 New York City has no shortage of Halloween attractions, from costumed dog parades to S&M-heavy haunted houses. But if you are looking for more high-brow entertainment– with a decidedly anti-Wall Street bent– head to Brooklyn for Dead Dream Machine.

This off- off- off- Broadway show features a talented cast and scenes that range from hysterical to bizarre. Both inspired by and spoofing classic horror films, Dead Dream Machine is a uniquely Brooklyn production that combines elements of burlesque, acrobatics, puppetry and bondage.

Much like a Saturday Night Live episode, some of the vignettes fell flat but others were so hysterical, offbeat and downright bizarre that they played over and over in my mind throughout the weekend. If you ever want to see a hipster werewolf summoned from the dead to sing a soulful ballad, you are in for a treat!

Make sure to check out Dead Dream Machine during its limited run (September 19 – October 13, 2013). Read on for details of this unique show.

This is not a haunted house

In fact, the scariest thing about Dead Dream Machine is its location: a black box theater 10-minutes by foot from Bushwick’s Morgan Ave subway station. As I walked down desolate streets to the La Luz theater, passing street art-covered warehouses and the occasional twenty-something club-goer,  I wondered if anyone else would be in the audience for this show.

To my surprise, the opening night performance was packed. As I waited for the curtain to open, an usher in steampunk attire added 2 rows of folding chairs in front of the stage and patrons sat down in the center aisle. The audience was almost as interesting as the performance: two women wore flowing, white fairy gowns while a dozen men sported flannel shirts and lumberjack beards. I suspected they would be part of the performance but no… this was just Bushwick!

Paper plates of homemade vegan food and Tecate beers were being served at the bar, and Mariachi beats poured into the theater from the nearby gas station.

Off-broadway can be iffy, but the one consistent thread between the Dead Dream Vignettes was the high quality of performances. In particular, Chris Cipriano was captivating in four different roles, including a curious teen investigating a haunted house and the voice behind a brown-nosing puppet. Additionally, one of the funniest performances in the show was an actor giving a dead-on caricature of a Wall Street tycoon. (Imagine Gordon Gecko talking into four separate 1980s cell phones while haggling with the Devil). Amanda Peck was also a scene stealer with her physical performance as a research participant being repeatedly electrocuted in an experiment-gone-wrong. The audience roared with laughter each time she convulsed in the souped-up electrical chair.

Occupy Wall Street may be a distant memory in New York City, but Dead Dream Machine keeps its spirit alive. Several scenes skewered the 1%: a vigilante ties up a doctor who has sold his soul to the pharmaceutical companies; a greedy Wall Street exec literally makes a deal with the devil in order to stave off death; and a selfish queen steals the dreams of local villagers. While the doctor-in-bondage scene was too long and cliched, it was interesting to see a horror-themed satire work in these populist elements.

The set design was also impressive, with the actual Dead Dream Machine looking like Tim Burton’s take on the electric chair.

Each week a different guest musician plays the role of the Shaman, a werewolf-like creature in a tattered suit who sings a hunting melody, accompanied by a cellist. While the meaning of this scene is anyone’s guess, it is an unexpected and fun element that invigorates the audience towards the end of the show.

Finally, the dance and musical numbers were unexpected and added some gravitas to the production. During set changes we were treated to ballet-meets-burlesque performances; additionally, there were aerial acts featuring both a woman and a man. I had never seen a guy work an aerial silk before, and it was a treat.

As mentioned above, not all of the skits in this nearly-2 hour show were winners. While the idea of a life-size puppet performance was innovative, the scene ran long and became confusing (particularly when poster board drawings were used to represent villagers).

Additionally, the vignettes did not appear to be connected until the revelation, in the very last scene, that these were the dreams of the girl locked into the Dead Dream Machine in the opening act. I enjoyed the send-up of classic horror archetypes– the adventurous and ill-fated teens in a haunted house, the young lovers encountering evil at a make-out spot, the creepy magician, the evil doctor– but would have liked a clearer link to the opening premise.

Dead Dream Machine is a creative send-up of the horror film genre. For under $25 you’ll get 2 hours of high-quality acting, aerial and dance performances– not to mention the most unusually-dressed audience in off-Broadway theater. And don’t you want an excuse to visit Bushwick, NYC’s trendiest neighborhood?

Blogger disclosure: I attended the Dead Dream Machine performance on a press pass.