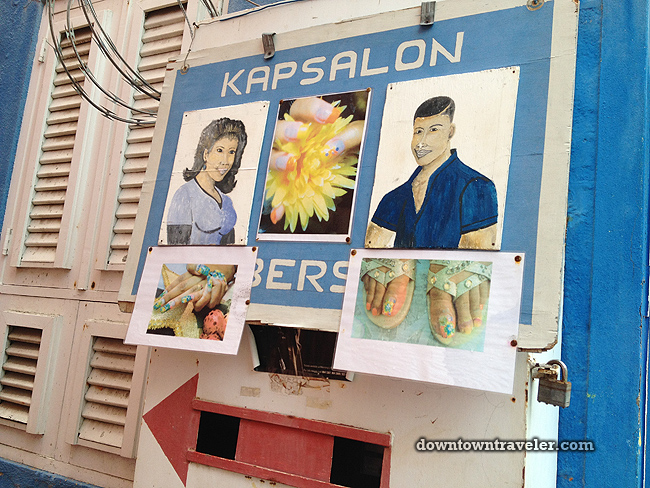 Think the Caribbean is all about beaches? You might be surprised to find a thriving street art scene in Curacao, an island in the Netherlands Antilles. This clean and orderly country seems to have embraced artistic expression; even public service announcements and barber shop advertisements are painted by hand on its pastel walls.

Scroll down for 24 more original photos of Curacao’s street art– and let us know what you think of this artwork by leaving a comment below! Willemstad, Curacao’s capital city, is known for its quaint colonial center and the Queen Emma floating bridge. The area is swarmed by tourists– and is also home to an intriguing work of public art. An airplane made of found objects (namely wooden planks, painted fabric panels and car doors) appears to crash into the sidewalk just feet from the bridge entrance. The painted panels covering the sculpture have political and economic themes– suggesting this might be Curacao’s version of Occupy Wall Street protest art. At the top (or tail) of the plane is the portrait of a  pants-less black man with a white face, who appears to be urinating. A nearby panel shows prices for basic commodities in US dollars . There is no literature or signage near this artwork, and I wasn’t able to dig up any information about it online. Without knowing Papiamentu, the local language of the ABC islands, it’s hard to be certain of the artist’s message. However, the mention of Venezuela, Cuba and the “USA of Hyatt” suggests the artist is criticizing foreign influence. If you speak Papiamentu and can shed light on the meaning of this sculpture, please leave a comment below. This line from the artwork may provide a clue:

>> Update 2/26/12 – An alert reader tipped us off to the origin of this artwork. The Instituto Buena Bista, a contemporary art institute based in Curacao, confirmed that its students created this sculpture:

“The sculpture represents a rocket and was built on assignment given by the local government. They asked our students to visualize how they saw the future of Curacao. The students showed us that they actually do not see a very bright future for our island as they presented their fears, worries, thoughts and emotions in their paintings.” On closer inspection, it appeared the glossy wooden sculptures were carefully placed in the tree hollows. It was quite a surprise to see these intricate depictions of the human body nested in common trees! There is no signage marking the tree art so most pedestrians pass right by without noticing it. A few sharp-eyed tourists examined one of the tree sculptures after I stopped to take photographs. This is a public space, not a museum, so you can reach out and touch the artwork. This may be why the final sculpture in the series shows serious signs of wear. The architecture in downtown Willemstad is very traditional; pastel-colored buildings with red tile roofs dot the landscape. Painted murals are also a fixture of the city, ranging from advertisements for local shops to political art.

I spotted this painting of a defiant child on the edge of the tourist zone in Otrobanda. It shows a boy scowling under the words, “Tula Town Respect City.” Tula is a celebrated historical figure in Curacao– a slave who led an 18th century slave revolt. Although he was executed, Tula is remembered as a human rights activist. A bit closer to the floating bridge on the same street, Breedestraat, graffiti scrawled on the side of a local shop reads, Fans of rappers NWA will recognize this message, which seems to have no international borders. Even Curacao’s public service announcements have an artistic twist. I came across this anti-littering sign in a residential neighborhood east of Willemstad. In English and Papiamentu it bears the message, Heading east from Willemstad I spotted this upbeat graffiti near a school. While the message was clear– peace and love– the artists had not perfected their English spelling. Oil– not tourism– is the main industry in Curacao, and a massive oil refinery is located just north of the tourist area in Willemstad. The refinery isn’t visible from the floating bridge or the cruise ships that dock on the south side of the island– but if you drive a car to or from Willemstad you can’t miss the flaming smokestacks and industrial barges. After exiting the highway, which encircles the refinery, I came across an abandoned building covered in street art. This is clearly a critique of the oil industry; the mural includes a tiger wearing sunglasses (or blinders?) with the logo of Shell oil company. Smokestacks billow in the distance– contrasting with the topical flowers and sea shells above them. A second scene depicts a tiger taking off his Shell glasses, flanked by goats, a giant spider, a woman and the Curacao flag. While I can only guess at the significance of these details, it’s clear this artwork deals with the political, social and environmental impact of the oil industry.

>> Update 2/26/12 – The Instituto Buena Bista (IBB) has confirmed that this mural was created by guest artist Liesbeth Labeur with the assistance of IBB students. A Dutch artist, Labeur spent her childhood in Curacao and is writing a graphic novel about the “waning days of the Shell corporation” on the island. While lost in the outskirts of Otrabanda in Willemstad, we passed a billboard with a hand-painted image of Jesus. The copy read, “Señor danki”– Papiamentu for “thank you Jesus.” The Caribbean-style buildings throughout Curacao are beautiful– even when they are crumbling. Many commercial buildings are covered with painted advertisements for beauty salons, supermarkets and restaurants. This shut-down barber shop was tagged with the words “no pichi aki”– which (I believe) roughly translates “no graffiti here.”

>> Update 2/26/12 – A reader with knowledge of Papiamentu says this tag could be a misspelling of “no pishi aki”– which would translate “don’t p*ss here.” This ad for Nena’s Dominican restaurant in Willemstad caught my eye. They are clearly targeting diners who like their women with curves! Even international beer brands advertise with painted posters in Curacao. The paintings on the side of this Fu Hao supermarket give passers a good sense of what products are sold here: cheese and Polar Beer. I’m not sure what this Otrobanda mural is promoting, but it reminded me of the classic “see no evil, hear no evil, speak no evil” figurines.

What do you think of Curacao’s street art?

previous post Top 5 tips for renting a car abroad and driving overseas
next post Review: Taking a movie tour of Central Park with On Location Tours