Valentine’s Day Q+A: Expert tips for traveling as a couple 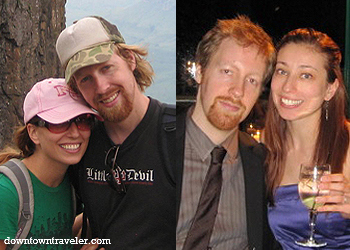 Nothing says “commitment” like traveling around the world with your sweetheart. Whether backpacking through Laos or lounging on a Caribbean beach, these couples are together 24 hours a day, 7 days a week. To borrow a phrase from MTV, that’s when things get real.

So what’s it like to travel long-term with a significant other? We contacted nine travel bloggers to find out. These intrepid travelers– who hail from the US, Canada, England, Korea and Malaysia– have dealt with the ups and downs of couples travel.

They’ve agreed to share their tips with Downtown Traveler readers in our special “Romantic Travel” series. Scroll down for links to each post and for bios of featured bloggers.

The world’s most romantic travel destinations

How to keep romance alive on the road

What should you do when travel itineraries conflict?

How to deal with arguments while traveling

Top 9 reasons to travel as a couple

Erica Kuschel of Over Yonderlust:

Shaun and I took our first international trip together on our honeymoon almost 8 years ago and have been traveling together since. We met when we were 15 and 16 (respectively) at an early morning church youth bible study program (our parents made us go). No, we don’t practice. Yes, it is ironic considering how many tattoos we have.

My wife Leslie and I first traveled as a couple shortly after we met, about 8 years ago, and have been traveling together ever since. After getting engaged in 2008, we quit our corporate jobs in Manhattan to backpack around the world for a year. We slept in hostels, guesthouses, tents and a prison during the trip– and discovered that the nicer the accommodations, the fewer arguments we had!

Whenever people ask ‘How did you meet?’ our answer was ‘twitter’. We’re saying as a joke but it’s true. It was just another tweetup with a fellow travel blogger. I was ‘the one’ to meet if you are travel blogger who is traveling to Seoul and Stephen was on his way to go back home on the last Valentines Day. And I’ve heard the editor of Downtown Traveler was the one who suggested he contact me. I guess there was something special with the tweetup, not just for me apparently. We overcome 14 hours of time differences and kept communicating. And you know the rest of the story.

We met in Seoul, South Korea after I finished teaching at an English language camp in February 2011. Before that we had contacted each other through twitter due to an introduction from fellow tweeter @downtowntravel. Funny that the first time we met was on February 14th. For the next few months we stayed in contact via email and Skype and by June of 2011 we were traveling together in the United States. We have been traveling consistently since then, except for a two-month break because of visa restrictions.

We’ve been married for 6 years now, so we’ve been traveling together for as long. We met in Malaysia. Jo came back from his studies in the States, and me from the UK. The rest as they say, was history!

We took our first trip together about 9 years ago. It was a 10-day road trip down the Oregon Coast, from Vancouver to San Fransisco and back. Spending countless hours together in the car was a great test of our relationship. It proved to us that we travel well together and was the start of what has become one great adventure as a couple. We have since traveled to over 50 countries together in the past 7 years.

Lee is from Lancashire, England and I am from Alberta, Canada. Before we met, we both went on a working holiday in New Zealand in 2009. We met while we were there, while we were both working as tour guides at a historical haunted prison called Napier Prison on the North Island.

We were working in exchange for accommodation and living in the prison cells! The travel romance felt like something more and so he invited me back with him I said yes. We lived in England for a year together, traveled to Italy and Portugal, and we are currently in Canada.

Matt and I have been traveling for over 10 years and we met in college. Since we’re both musicians (he’s a trombonist and I’m a pianist) we often play together, although it’s harder to do that on the road! He takes the photos while I do the writing for the blog.

Aracely and I have been enjoying trips together since we met in a Hoboken, New Jersey bar in 2006. Our first journey was to the bottom of the Grand Canyon. From 2009 to 2010 we backpacked Central and South America. Now, as a married couple, we still find time to escape our work and enjoy what we love best, exploration and adventure.

Click here to see all posts in this 5-part series on romantic couples travel!