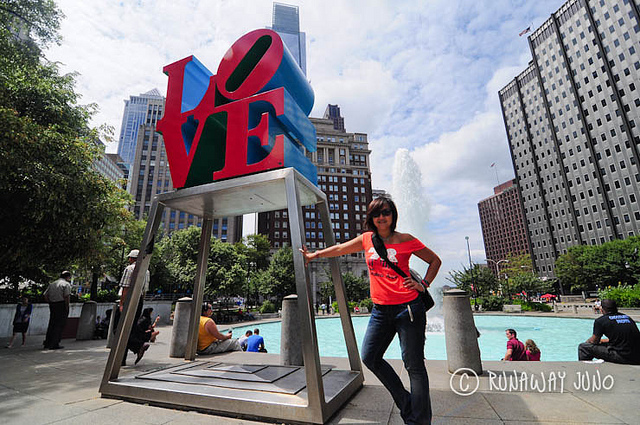 Today’s post is by Runaway Juno, a South Korean blogger with a taste for adventure. She is currently traveling across the USA and blogging about her experiences at RunawayJuno.com.

During my US roadtrip, I spent five good days in Philadelphia, Pennsylvania (or Philly, as everybody calls it). It was a long stay, considering I’m on the road with limited time, but I still felt like I wasn’t done with the place.

Philly was all about art and science. Art-wise, the most appealing part was the murals. True to its nickname, “Mural City USA,” murals can be seen anywhere in Philadelphia. Moreover, these art projects were painted, made, and created by the people of the city. And they’re on-going.

Science-wise, I was glad to know that Ben Franklin is one of the most famous people in the city, even though he is not standing over the city hall. As a science geek, I’m quite familiar with Ben Franklin’s astonishing work but didn’t know that he did his work in Philly. You can guess where I spent a good part of my time while I was in the city. Yes, the Franklin Institute!

Here are city views of Philadelphia, PA, seen through my eyes.

Photos: A Traveler’s View of Philadelphia Love Statue and me! Phil the Sphinx at the University of Pennsylvania Museum.The third largest Sphinx in the world. University of Pennsylvania Museum from the outside. The Rocky statue is another big attraction in Philly. The Benjamin Franklin Bridge, on the Big Bus Tour. A random building I saw outside of Center City.

Juno Kim, as known as Runaway Juno, is an avid backpacker and former Mechanical Engineer.

An escapee of the corporate life– which she calls the “cubic farm”– Juno now spends her days visiting and blogging about beautiful destinations around the world. A firm believer in serendipity, she’s committed to living life with passion and love.