It’s been a busy week in the travel and tourism industry. Scroll down for the latest social media news stories affecting travelers, bloggers, tour operators and DMOs.

If you have a social media event or news story to add to this roundup, please leave a comment below! 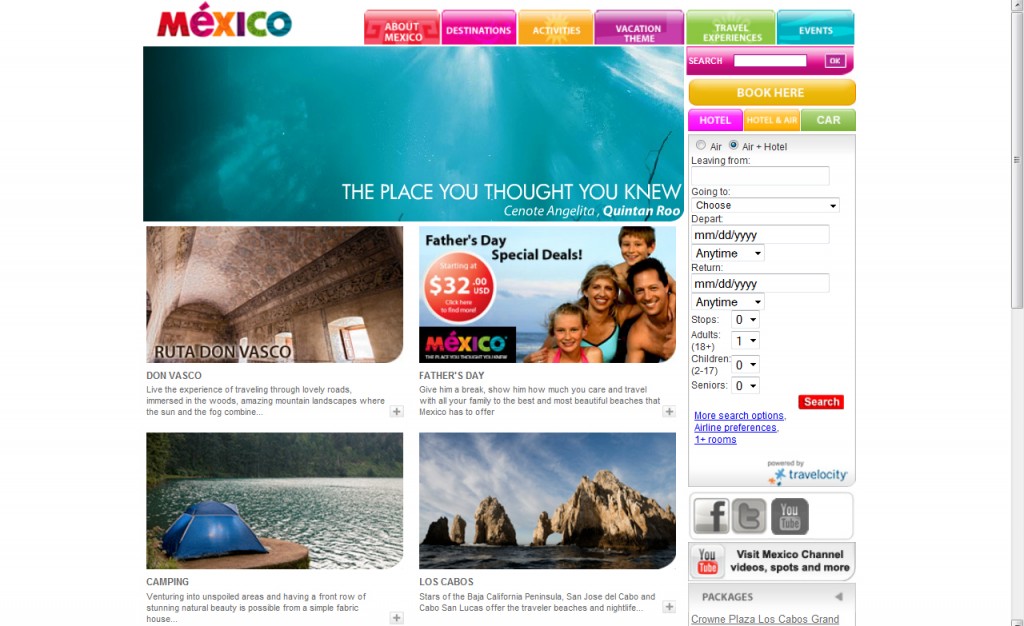 Mexico Focuses on PR, Digital Media to Lure Back Tourists

The Mexico Tourism Board hopes to boost tourism and dispel safety concerns by focusing on public relations and digital efforts instead of traditional media buys.

“We’re reaching out to [leading] media outlets like Bloomberg, Newsweek and CNN to help us tell our side of the story and get the facts straight,” Mr. Llanes said. “We’re not denying that there are some areas of the country that have problems, but we’re saying if you hear about something bad in Chicago, it wouldn’t stop you from going to Los Angeles.”

Mexico is also launching a $1 million positive branding campaign carrying the tagline, “The Place You Thought You Knew.” No word yet on whether the PR campaign includes blogger outreach.

The Canucks riot in Vancouver made headlines earlier this month and created an unflattering image of the city. In response Tourism Vancouver has launched a website, www.thisisourvancouver.com, as a one-stop source of photos, video and comments.

“Today, Vancouver’s integrity shines again. This is a testament to the commitment of this city’s citizens to set things right if they have gone wrong. ‘This Is Our Vancouver.com’ is our way of helping the world know that Vancouver’s greatest asset is its people.” Korean travel blogger Juno is on her way to the US. (photo:RunawayJuno/Flickr)

Korea’s leading travel blogger, Runaway Juno, is ditching the “cubic farm” (her day job as a mechanical engineer in Seoul). Her first order of business is visiting the United States this summer. She’ll be in Washington DC for the 4th of July and will make a stop in New York; expect more time-lapse travel videos of her journey. Contact Juno on Twitter (@RunawayJuno) if you’d like to show her around your hometown!

Leading travel companies Priceline and Expedia are following Travelzoo’s lead and are embracing local deals. Priceline is rolling out deals on spas, restaurants and retail stores in a partnership with Group Commerce Inc; their New York City site is already live. Competitor Expedia recently partnered with Groupon to offer local deals on hotels.

The Ritz-Carlton’s Foursquare profile now includes tips on local destinations for all of 75 of its hotels. The feature is meant to showcase the knowledge of Ritz Carlton concierges and give current customers a way to interact with the brand.

London Olympic Athletes Could Be Banned For Misusing Twitter

Twitter is usually a solid source of celebrity gossip, but don’t expect any shocking tweets from Olympic athletes. Under new guidelines set by the International Olympics Committee, athletes can be banned if they post commentary about the games or other athletes, use vulgar language or post video taken at official venues.

What: AFExpo is a social media conference for marketing professionals, developers and “anyone looking to stay up to date on Facebook advertising, Pages and Places, app platform, and Commerce and Monetization.”
When: June 28-29, 2011
Where: Mission Bay Conference Center at UCSF, 1675 Owens Street, San Francisco, CA 94143
Cost: The least expensive ticket is the Expo & Networking Pass ($25 at door or free for online registrants)

Tip of the Week

“…In the eyes of Google, it’s better to have