A warm welcome in the ancient city of Jerash (photos) 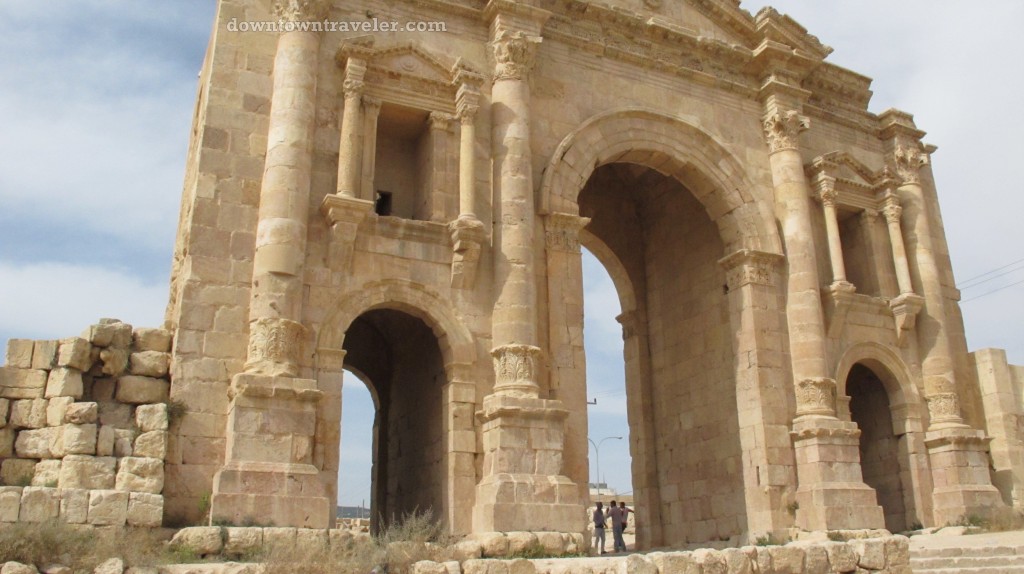 After spending a day in Petra, the most popular (and blogged about) ancient site in Jordan, I didn’t have high hopes for Jerash.

I had seen stunning photos of the Jerash ruins on the Go, See, Write blog, but figured they couldn’t compare with the perfectly preserved monuments in Petra.

To my surprise, Jerash ended up being the highlight of my visit– thanks to the friendly schoolchildren who welcomed us to the city. Jordanian schoolgirls posed with me and Marie-Rose Lohier of Academic Travel Abroad in the ancient city of Jerash.

After weaving our way through a tourist market, we entered the Greco-Roman city of Gerasa.

We immediately encountered a stream of Jordanian students. They waved, shouted “hello” in English, skipped through the ruins and even burst into song in the middle of the Forum.

It turns out our visit coincided with a school holiday. It was clear the students were enjoying their time off! Jerash was the last stop in Jordan for the “Restoring the Journey” trip, which brought a delegation of US tourism leaders to Egypt and Jordan to investigate travel safety. I was exhausted from a week of official meetings, power lunches, sightseeing and late-night tweeting sessions. Fortunately, the enthusiasm of the schoolgirls was catching.

Watching girls sprint past the 2,000-year-old ruins while giggling with their friends was like an espresso shot; I spent the entire Jerash visit with a huge, goofy smile plastered across my face. (See top photo for evidence). Tourism to Jordan has fallen off since the Egyptian revolution, as safety-conscious travelers canceled their Middle East trips.

Jordanian Tourism Board director Malia Asfour explained in an interview,

“This is a great time to visit because we are victims of geographic misperception. Tourism is low, so you can have a visit where there are less crowds, less people. It’s a great time to interact with the people of Jordan, who are hospitable and would give you the shirts off their backs if they could.”

On the day we visited Jerash in late April, violent clashes in Syria were making headlines; the Syrian government had just closed the border with Jordan. Jerash is only a 40 minute drive from Syria but I never felt unsafe in the city. To the contrary, I felt welcomed by the locals and was struck by their openness.

In a scene straight out of a Broadway show, a group of schoolgirls burst into song in the middle of Jerash’s ancient Forum. Framed by hundreds of Roman columns, the girls clapped and danced as we snapped photos.

They reminded me of junior high school girls in New York City– and they even wore similar clothes (with the addition of colorful headscarves).

The Jordanian students were eager to speak with our group and tried to guess where we were from. One boy called me “señorita.” Perhaps my business look– a wrap dress and dust-covered shoes– gave me a Spanish flair.

With the possibility looming of an audience with King Abdullah II, I opted for formal wear throughout the trip. (Alas, we did not meet the King or his glamorous wife, Queen Rania. Maybe next time). Local boys were also in great spirits, and posed for photos with members of our delegation. They donned the traditional Jordanian red and white scarf, the keffiyeh.

We weren’t the only focus of the children’s attention. On the Solo Traveler blog, Janice Waugh recounts her run-in with a group of friendly Jordanian girls. The Jerash ruins were impressive in their own right. The massive Arch of Hadrian, built in the 2nd century AD, welcomes visitors to the ancient city. Once we walked through the gate, we discovered a diverse group of structures– from the hippodrome to a walkway lined with Roman columns. Time was running short, so we rushed through the theater, an impressive complex with steep rows of seats. I spotted fewer than a dozen foreign tourists in the theater, apart from our group. That didn’t stop a band from playing a traditional Jordanian song on drums and what appeared to be Scottish bagpipes. Our guide, Kamel Al-Jayusi, revealed that this was the national anthem. In ancient times, spectators packed the hippodrome to watch chariot races. Reenactments are still held for tourists, but the field was empty during our visit. I visited Jerash with the "Restoring the Journey" delegation, consisting of US tourism leaders, tour operators and journalists. Our fantastic guide, Kamel Al-Jayusi, is front and center in this photo.

While our stay in Jordan was brief, I was impressed by the ancient attractions, the vegetarian-friendly food (and massive portions) and the hospitality of the people. I hope to return soon to explore the rest of the country.

This is the latest in a series of reports on the “Restoring the Journey” trip that brought US tourism leaders to Egypt and Jordan to investigate travel safety. I accompanied the delegation, which was sponsored by local tourism ministries.