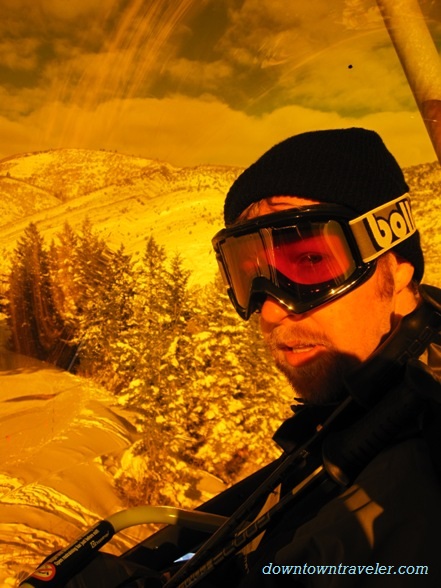 Heading to the slopes at Canyons Resort.

On the day after Christmas, I narrowly escaped the snow storm that pummeled New York by catching an early flight to Salt Lake City. I was determined to spend New Years Eve with my family and take a break from the holiday crowds in Manhattan.

During my visit to Utah I spent a full day skiing at  The Canyons Resort in Park City. It was the first time I had skied in several years, and at first I was a bit hesitant about how well I’d perform after such an extended break.

Fortunately, I discovered that skiing is like riding a bike. It’s easy to pick up where you left off.

Skiing in the East Coast

As a child growing up in northern New Jersey, I was fortunate enough to  take frequent trips to Vermont every winter.

I learned to ski at resorts like Killington and Mad River Glen from the age of six. I always considered myself to be one of the best skiers in my elementary and junior high schools.

At most of the ski resorts in the East Coast, the toughest slopes one would usually encounter — the dreaded “black diamonds” — were usually nothing more than mildly steep, wide open, icy trails that I was able to fly down with relative ease.

When I was 13, however, our family packed up and moved west to Salt Lake City, Utah.  I eagerly looked forward to the first winter when I would be able to showcase my talents to a new set of classmates– this time on the world class Rocky Mountain ski slopes. A trail at Canyons Resort

To my welcome surprise, I learned that every winter my high school would end classes at 11:00am on Fridays and shuttle all 250 students up to Solitude ski resort for a half-day on the slopes.

I quickly realized, however, that the standard of skiing excellence on the East Coast was on an entirely different scale out West.

Nearly every classmate, mostly native Utahns, was as good as, or better, than myself.  They crisscrossed down the powdery slopes with complete ease.

The sheets of ice that I had grown accustomed at East Coast resorts were replaced by fresh foot-deep powder in the West; the machine-manufactured snow was replaced by tons of the real thing.

For someone unaccustomed to skiing in deep snow, it is an entirely different experience.  Instead of sliding down icy slopes, you have to hop you way down in order to stay above the deep powder. It’s is a tough workout, especially when factoring in the thin Rocky Mountain air at elevations of up to 12,000 feet.

Over time, I was able to adjust; however, never again was I anywhere near the best skier amongst my friends.

Back on the trails

Since moving back East about ten years ago, I have been unable to ski with any regularity; this visit home gave me the chance to see if my childhood skills remained.

For the first half of the day at Canyons, I stayed by my wife Leslie’s side on the beginner and intermediate slopes, taking it easy both for her sake and for mine. A large jump at Canyons Resort

Later that afternoon, however, she began to run out of steam, Her subsequent hot chocolate break allowed me to challenge myself with one of the half dozen or so “double black diamond” trails that Canyons offers.

I decided on Deshutes Trail, a double-black at the top of the nearest chairlift.

After passing through the imposing warning gates to enter the double black diamond, I began to work my way down.

Deshutes consists of a steep, unkempt trail littered with dense trees off to the side of the main advanced course.  There were various ways to go down, all of them narrow chutes, giving the trail its name, and each bared exposed rocks and fallen branches.

To my pleasant surprise, I was able to make my way down without incident, albeit a bit slower and while breathing a bit harder than I once could have in my prime.

Now that I’ve headed back East, it’s a little depressing to realize that I probably won’t get a chance to ski the West again until at least next winter.

Still, I take pleasure in knowing that my ability is still here after all these years away from the slopes. Hopefully I’ll find a new challenge to take on next season.