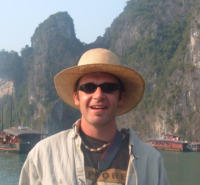 Ted’s been backpacking since elementary school and has canoed, cross-country skied and hiked all over the United States and the world.

He completed the elite Birkebeiner ski marathon, is a fan of winter camping and once swapped campfire stories with a lady boy in Thailand.

A perfect winter day in Chicago

Cross-country skiing in the afternoon and hitting the town at night is a sublime way to spend a winter Saturday in Chicago.

I had plans with friends for Saturday evening.  It was dinner at an Ethiopian restaurant, a Festivus party, and then out for more drinks. It was 10am when I awoke, and I had no obligations between then and 7pm.

There are many ways to waste away a Saturday afternoon: college basketball, reading, social networking on Twitter, Christmas shopping, or going outside, getting exercise, and enjoying the outdoors.

I chose the latter and grabbed the cross-country skis.

In two hours I was at the Warren Dunes State Park, just north of the Indiana and Michigan border right off Interstate 94.  Even in a metropolis like Chicago, one can find a place within two hours or less to adventure.

I pulled into Warren Dunes around 1pm and there was hardly anyone there.  One would think the outdoor areas would be full on a moderately warm Saturday afternoon in December.  People must have been shopping or hunkering down indoors. I had the trails to myself. 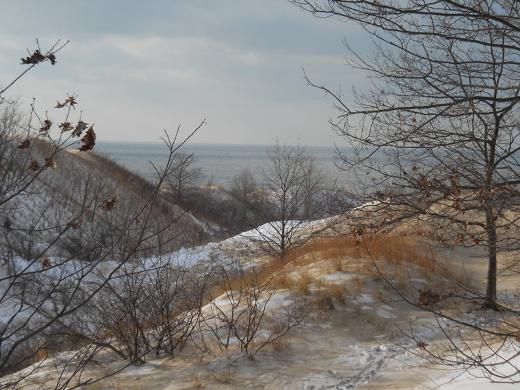 View from a trail at Warren Dunes State Park.

The trails in Warren Dunes are not groomed.  I usually prefer groomed trails, but the narrow trails snaking in between large dunes make it feel like a true cross-country experience.  Others had skied the trails before, so I was able to follow their tracks.

At one point the tracks ended, yet the trail continued up a large dune.  I decided to make my own tracks and climbed the large hill.  I skied around a corner and was rewarded with a brilliant view of Lake Michigan and the surrounding dunes. 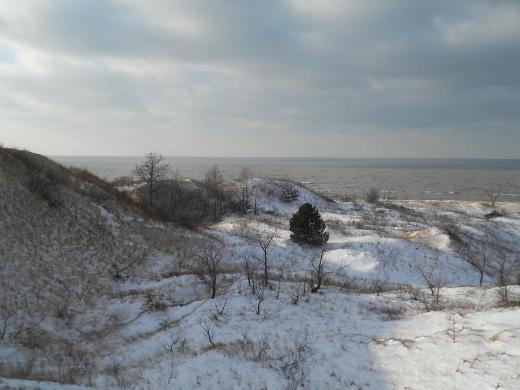 I turned around and a hawk glided over the hills and the bird’s silhouette was outlined in the backdrop of a brilliant blue sky.

I could not believe I had this incredible experience all to myself and I was less than two hours away from downtown Chicago; meanwhile, on the other side of Lake Michigan, millions of people were shopping or wasting away an afternoon.

After an invigorating two hour ski, it was back to my car for a two hour drive to the bright lights of the city.  At Demera, the Ethiopian restaurant, I gorged myself on injera-filled tilapia, beets, and other African delicacies while drinking a few Ethiopian beers.  It was great to be among good friends in the city.

Ted (at left) unwinds with friends after a day spent skiing in Warren Dunes State Park.

In the back of my mind the image of a hawk flying over a dune in the bright blue Michigan sky would not go away.  This was a good thing as it was a memory I did not want to disappear anytime soon.

>> Check out the Demera Ethiopian Restaurant website for menus and location.