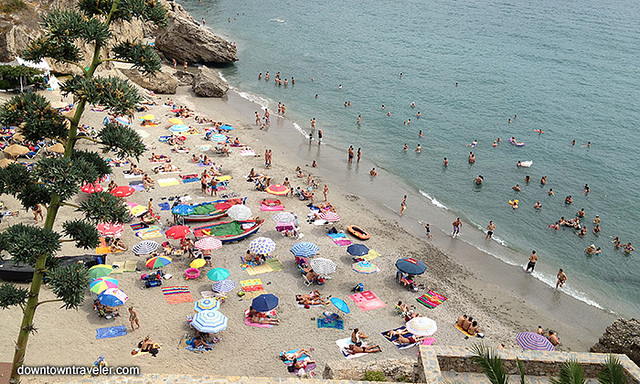 The Caribbean doesn’t have a lock on white sand beaches, clear turquoise water and a laid-back attitude. Surprisingly, these tropical attractions are available– along with a heavy dose of culture– in Spain. New Yorkers don’t typically spend 8+ hours on a flight just to visit a beach, which explains why Hawaii is a once-in-a-lifetime honeymoon destination but a Caribbean getaway is an annual event. We tend to see Europe as an arts-and-culture destination and seek sun and surf closer to home.

I shed my New World bias this summer after visiting Spain’s Costa del Sol. The trip was booked on a whim after discovering that non-stop flights to Malaga were the second-cheapest in Europe (after Dublin) for travel in late August. With five nights split between the historic town of Grenada (home to the Alhambra) and the coastal city of Malaga (think San Diego with ancient ruins), I wasn’t expecting much beach time. But a day trip to Nerja ended up being a highlight of the trip.

Once a quiet fishing village, Nerja is now a bustling town popular with British expats and European tourists. While hardly an undiscovered gem, Nerja continues to lure visitors with its beaches, delicious food and caves (see below for details). Make sure to spend a day here on your next trip to coastal Spain. Nerja manages to retain the charm of a small town, with its red-tile roofs and cobblestone streets, while providing the tourist services of a larger city. Souvenirs and last-minute beach supplies can be picked up at a modern supermarket in the town center or in shops just steps from the beach.

While Nerja was packed with domestic and international visitors during my late-August visit, it was still possible to find convenient parking in a paid lot and claim a prime stretch of sand. To beat the crowds, arrive early and skip the first beach (to the left of the Balcon de Europa lookout). The most important advice for a prospective visitor to Nerja: Make sure to bring pocket change for snacks, since the village is bursting with gelato shops! You’ll have a hard time picking a flavor, with multiple Nutella variations and so many embellishments added to the gelato trays that each one looks like an exquisite cake. You’ll also be tempted to order paella (a traditional rice-based seafood dish) from one of the many cafes lining Nerja’s cobblestone alleys. The going rate for a tourist-friendly plate of paella is 5 Euro; it may not be the tastiest rendition, but it’s cheap and makes a great photo-op!

Nerja is not exactly a street art haven but I spotted a few interesting pieces in town. My favorite summed up the complex emotions I was experiencing on this end-of-summer vacation:

Google searching revealed this to be the title of a song by Spanish pop group Amaral. Nerja has at least one natural attraction that does not involve sunbathing: the Nerja Caves. On an overcast morning, I waited in a short line (just beating a few busloads of tourists), paid 8.50 Euros, and descended down several staircases to reach an underground labyrinth of stalactites and stalagmites.

Not for the claustrophobic (or disabled), the winding paths bring visitors close to bizarre rock formations that vaguely resemble human figures. The caves were discovered in 1959 by a group of local guys who are immortalized (nude) in a statue near the entrance; it’s unclear what they were doing when they discovered this natural wonder, but clearly they were having fun.

I enjoyed my visit so much I even splurged on the official souvenir photo (below), which set me back several Euros. The beach town of Nerja, Spain, is a relaxing place to spend a summer day. You’ll enjoy the sunshine and the opportunity to rest your feet after intense sightseeing at the Alhambra or Malaga museums. And if it rains, you can always head underground to the caves. I wouldn’t recommend this as a base of operations if you want to visit historic sights, but it is a worthwhile day trip.