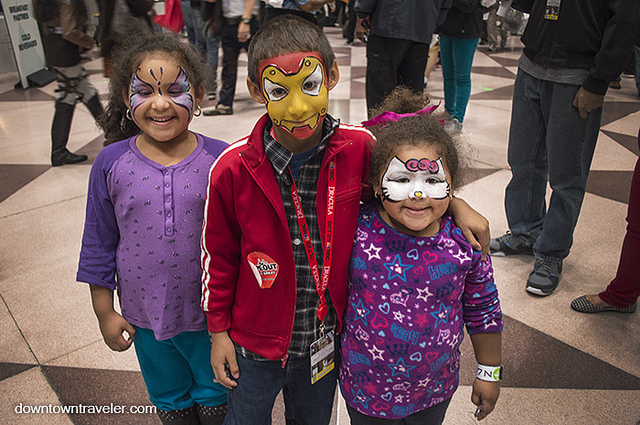 The kids at NY Comic Con don’t command as much attention as women wearing revealing X-Men costumes, but their enthusiasm is catching. Not only do they get to dress as their favorite characters at the Con– and it’s not even Halloween!– but they get to see all their comic and movie favorites come to life. In a sense, everyone at NYCC is releasing their inner child.

I was struck by the variety of costumes worn by babies, kids and tweens this year. Some found inspiration in classic figures like Batman and the Joker, while many tweens gravitated toward the webcomic Homestuck or the world of manga and anime. Featuring face paint, masks and props, these kids costumes are a lot more elaborate than the Halloween costumes I wore growing up in the 1980s.

The following are my picks for best family and children’s costumes at NY Comic Con.

Families that cosplay together… If eating dinner together is supposed to mean a family unit is tight, then dressing in a group costume is a whole new level of bonding. I stopped in my tracks when I saw this adorable family of Avengers characters. Mom is the Black Widow, dad is Captain America and the three kids are Iron Man, the Hulk and Thor. It’s Norman Rockwell-meets-Comic Con. Love it! NY Comic Con fans enjoy dressing as obscure villains or unexpected versions of well-known characters, and kids are no exception. This boy is wearing a Nightwing costume; it’s the name Robin took after taking the reins from Batman. Robin was an orphan, but this young fan was accompanied by his mom (who created her own fox look). Spiderman remains a popular kids costume at NY Comic Con, and there are many variations. This adorable tyke wore a classic Spiderman top– no doubt selected by his proud dad (who was holding him in this pic). Spiderman and his progeny may not have worn pink, but this little girl embraced the color with her Spidergirl costume. Rule #1 of NY Comic Con: Never ask a Deadpool fan if they are wearing a Spiderman costume. This villainous mercenary doesn’t shoot spiderwebs but he does wear two impressive swords. This young fan proves a children’s version of an adult Deadpool costume is just as cool. The Batman universe may just be the top source of NY Comic Con costumes. The Javits Center brims with Batman, Robin, Joker and Harley Quinn outfits each year (not to mention the deep bench of sexy female characters like Poison Ivy and Catwoman). This girl struck a powerful pose with her Batgirl costume. The Joker is the quintessential villain: brilliant, unpredictable and insane. My favorite Joker costume at this year’s NY Comic Con was a kids version featuring green hair, haunting makeup and a purple blazer. Harley Quinn was the most popular NY Comic Con women’s costume — so it’s no surprise kids were getting in on the action. This little girl’s Harley Quinn costume featured a black and white dress and sceptre. Traditional Robin was also in the house. This girls Robin costume featured some kick-ass green boots with red laces. Love the look!

Star Wars… the next generation Star Wars may have hit its cultural zenith in the 1970s, but young fans continue to discover the world of Luke, Leia and Darth Vader. I spotted several male Jedis and a female Luke Skywalker at NY Comic Con, but the best Star Wars costume belonged to a boy. His Han Solo carbon freeze costume was incredibly detailed, if not comfortable. The most unique costumes combine elements from different characters. This boy described his costume as “Breaking Bat”– combining the wardrobe of Walter White from Breaking Bad with the mask of Batman. It’s a clever play on words… let’s just hope he’s not watching the intense TV drama! If you wonder why a legion of kids and tweens is trick or treating in blue face paint, there’s a simple answer: Homestuck mania. This webcomic emerged around 2011 as a top costume for the Gen Y set, with its eccentric and gender-bending characters. As this gaggle of girls testifies, all you really need for a successful Homestuck costume is blue facepaint, black hair (or wig) and candy-corn ears. A lot of girls also dress as Dave, a too-cool-for-school character from the series with short blond hair and a baseball tee (see the costume at the far right of the photo). There’s a bit of a generational divide at NY Comic Con, with adults favoring classic comic characters and kids and teens (especially girls) opting for anime and manga-inspired costumes. This kid looked sharp in an anime superhero costume, although I can’t pinpoint the character. If you know the name, please fill us in by leaving a comment! Don’t have time to sew an elaborate costume for your child for next year’s NY Comic Con? No worries– some of the cutest costumes just involve face paint. These kids had their faces painted at the convention, opting for a butterfly, Iron Man (?) and Hello Kitty.

What was your favorite costume as a kid?

I have fond memories of dressing as the Purple Pie Man from Strawberry Shortcake as a kid– a gender bending costume that consisted of a hard plastic mask (affixed with an elastic string) and a printed plastic poncho. It was definitely less sophisticated than these NY Comic Con looks!