PHOTOS: Beyond grunge – the ultimate guide to 1990s fashion 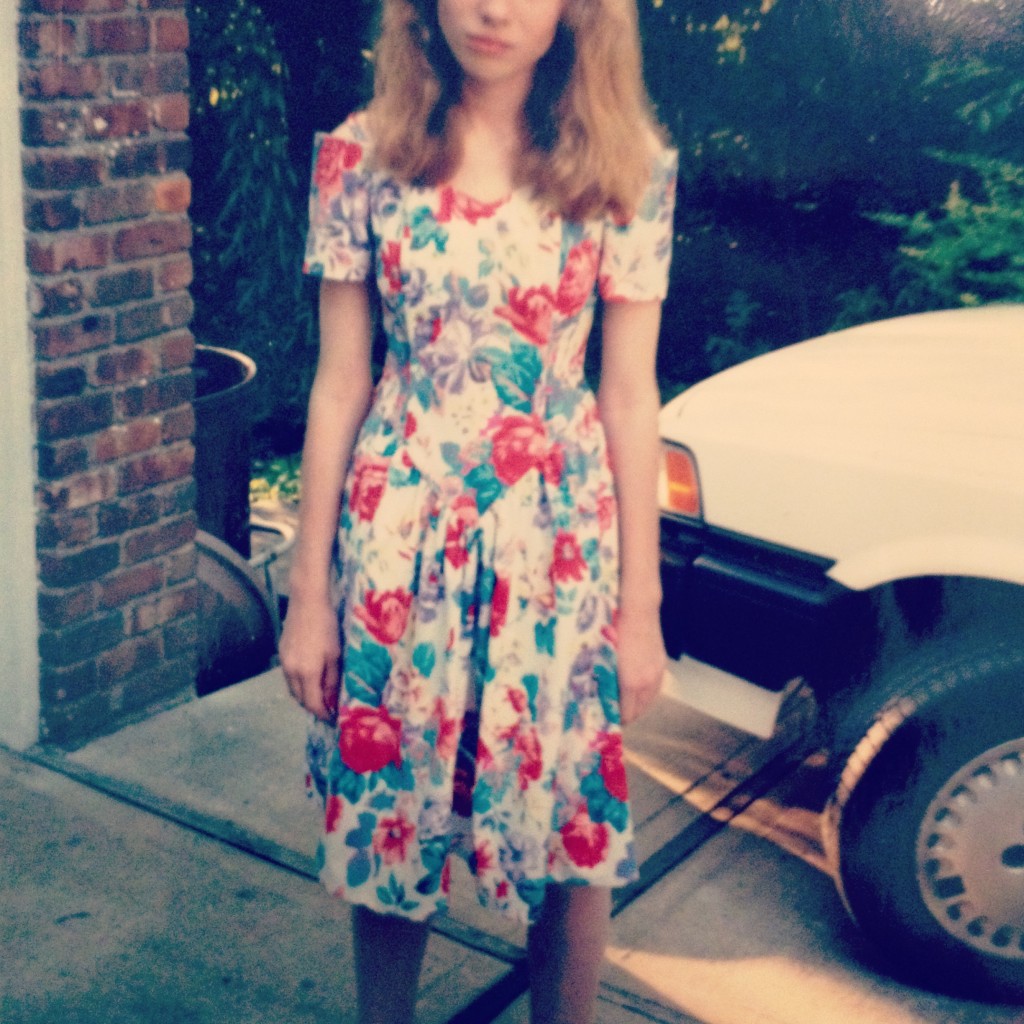 Stone-washed, bullet-riddled and bleach-splattered– those are just a few of the ways we wore our jeans in the 1990s.

If you’ve ventured into an Urban Outfitters lately, you know that our nation’s youth has thoroughly embraced all fashions from the Clinton administration.

Gone are the 1980s-inspired neon leggings; floral dresses and Doc Martens are here to stay! (Well, at least until the next trend arrives). If you are too young to remember the first Gulf War, the Monica Lewinsky scandal or Wayne’s World skits on Saturday Night Live, then this 1990s fashion guide is for you.

Note: All photos are of this writer except where faces have been cropped (to protect innocent fashion victims).

Every self-respecting 1990s teen had at least one pair of platform shoes in their closet. From plastic “jelly fish” sandals to vinyl Converse sneakers, heavy platforms were attached to just about any type of footwear. Before platforms became mainstream, budding fashionistas made their own towering shoes using instructions in magazines like Mademoiselle, or using their own ingenuity. I created my first pair using a glue gun and two pairs of Kmart flip flops. Watch any 1990s movie and the first thing you’ll notice are the high-waisted, baggy stonewashed jeans hanging from the female leads. Even Jennifer Anniston at her peak looked frumpy in this unflattering style, which took on the name “mom jeans” and was immortalized in a Saturday Night Live skit (see below).  The mid-1990s saw a craze for “low-rise” jeans, which sat above the hip bone and dipped just below the belly button. By today’s standards, they were practically overalls!

With 1990s music, TV and movies glamorizing raves— enormous, drug-filled warehouse parties that put today’s Bushwick fêtes to shame– it’s no wonder that clubwear made its way into everyday life. The 1990s saw an explosion of unnatural fabrics, from shiny vinyl miniskirts to pleather pants. As a high school vegan, I had my choice of non-leather shoes, clothing and accessories. As you can see in the photo below, I even had a matching vinyl scrunchie and skirt! (Yes, that is my grandma– this photo was snapped at my sister’s high school graduation). The mid-1990s saw an explosion of kiddie-inspired fashion, with teens and twenty-somethings wearing plastic hair barrettes (see below), carrying children’s lunchboxes and squeezing into miniature t-shirts. A “baby tee” resembled infant’s clothing, with a white elastic neck area and capped sleeves. Usually made of cotton but sometimes cut in Lycra or terry cloth, these t-shirts never fell below the navel. A dress-length baby tee in powder blue, made from washcloth-style fabric, was one of my go-to beach outfits in these wonder years!

How popular were scrunchies in the early 1990s? At the GAP you could pick up a scrunchy, headband and backpack in the same fabric– the perfect wardrobe trifecta. Made cheaply from scraps of fabric surrounding an elastic hair tie, scrunchies transformed greasy hair into perky ponytails and never lost their grip. Like the 1980s banana clip, scrunchies suffered from over-exposure and, by the late 1990s, were the kiss of death for fashionistas.

The rise of Nirvana and other Washington-state ‘alternative’ rock bands had a major impact on fashion in the early 1990s. The bright colors and cheesy hard rock styles popular in the 1980s were replaced by a low-key, effortless look. While Kurt Cobain wore ragged jeans and vintage sweaters picked up at thrift stores, most of us 1990s teens bought our grunge clothing at the local department store. Plaid flannel shirts and fuzzy acrylic sweaters were matched with ripped stonewashed jeans and Doc Martens (or, for the vegans, Vans). Shorts were cut from jeans, slogans were scrawled on Hanes t-shirts with markers, and the men’s section of the Sears catalog became semi-cool for the first time since 1937. Pretending you didn’t care what you looked like while agonizing over flannel purchases was the norm until Cobain’s untimely death in 1994 and the rise of club/rave culture. Catholic schoolgirls weren’t the only ones wearing short, pleated miniskirts in the 1990s. The film Clueless ushered in a new schoolgirl style. Fuzzy cardigans, dress shirts and mini plaid skirts– all in a ridiculously tight fit– graced high school hallways from California to New York. Not coincidentally, knee-high socks (especially in argyle patterns) also caught on during this period.

While elementary students are always eager to abandon babyish styles, teens actually embraced their inner child in the 1990s. Cheap, brightly colored plastic hair clips were must-have accessories, and plastic ball hair-ties made a strong comeback in the mid-1990s. I had an entire box full of plastic hair accessories that I picked up at drug stores, including a set of clips with random girls names like April and Amber. This type of quirky, ironic accessory defined mid-90s style! Pleather wasn’t the only alternative fabric making the rounds during the 1990s. Velour and synthetic crushed velvet were popular materials for long sleeve shirts and dresses, especially of the goth variety. Seemingly inspired by witches, bell-sleeve velvet dresses were commonly worn with chokers and chunky leather boots. I even wore a velveteen, snug-fitting t-shirt in my senior year class photo!

Coinciding with the popularity of grunge and goth music, and conveying just the right amount of angst, fishnets were a must-have item for any alternative 1990s teen. Usually paired with mini skirts and Doc Martens, and often sporting several runs, fishnets were appropriate for day and evening wear. I collected colored fishnets to wear with different outfits and boasted a diverse selection: white, petal pink, neon yellow, bright orange and red.

Rebelling against the tight, tapered jeans of the 1980s, mid-1990s teens opted for the baggiest pants possible. The most popular combination for girls was a super-tight crop-top (see baby tees, above) and men’s carpenter pants. This look was popularized by Gwen Stefani of No Doubt (before she began emulating Madonna). The funkier the pants, the better– with variations including camouflage military surplus, vintage men’s polyester and flannel PJ bottoms. The options were endless! The ultimate 1990s jewelry, chokers were paired with scoop neck tops and babydoll dresses. Popular in the early to mid-1990s, chokers were often made of black ribbon or leather cords and usually contained a pendant (like a stone encased in silver). Variations included dog collars and silver chains worn tightly around the neck for a more “punk” look, and colored ribbons for “hippie” vibe.

Calvin Klein is often credited with glamorizing heroin chic, marked by waifishly thin models in anguished poses wearing grimy, low-key fashions. Looking like you absolutely didn’t give a f*** about your wardrobe was key to this look! Calvin Klein print ads featured young, strung-out models in sketchy wooden-paneled basements, who looked ready to be arrested by vice cops. Heroin chic spokesmodel Kate Moss incited controversy for ads that showed off her nude, emaciated frame. You couldn’t create a whole closet around this look, but many of us had outfits that would be considered heroin chic. My low-key boy’s hoodie and DIY ripped jean shorts weren’t far from what the underage youth in Calvin Klien’s ads were wearing. As mentioned above, rave culture was huge in the 1990s. While many of us never actually attended a rave in high school– I never happened across one of these mysterious warehouse parties in suburban Long Island– many of us dressed like we were ready for an all-night dance party. Baggy pants, cartoon-emblazoned t-shirts, platform sneakers, mesh tops, piercings, candy necklaces, pacifiers and heads covered in a dozen hair clips were hallmarks of raver fashion. I never had a pacifier, which was a bit over-the-top and cheesy back in the day, but I did incorporate some elements of the look into my every day wardrobe. Fortunately I went to a public school with a lax dress code!

Tongues, eyebrows, noses, septums, breasts, belly buttons, nether regions… no body part was safe from piercings in the 1990s. Belly button rings were commonplace among high school students who showed them off in cropped t-shirts (see above). The most hardcore teens pierced themselves, but a good fake ID or shady piercer allowed underage high school students to get more adventurous. I admit to having a piercing or two in the 1990s and am proud to say my parents didn’t find out until after I removed them! In the 1990s as now, St Marks Place in the East Village offered ample opportunities for young people to get into mischief.

The innocence of 1980s children creating tie-die shirts in their backyards led to angst-ridden 1990s teens experimenting with bleach. A cheap tool for DIY fashionistas, bleach instantly transformed boring jeans and backpacks into grungy fashion statements (while leaving stains on many a carpet). Bleach was even the name of Nirvana’s first studio album!

Fashion seems to follow a 20-year cycle: In the 2000s kids obsessed over 1980s style, and the 2010s are all about the 1990s. Way back in the mid-1990s, clothing was heavily influenced by the 1970s. Department stores were packed with button-down polyester shirts in crazy patterns, extreme bell-bottom jeans and platform shoes. At the box office Dazed and Confused celebrated the lifestyle and fashions of pot-smoking, muscle-car driving, Aerosmith-loving high school students. In fact, the 1970s rock band even had a full-on revival in the mid-1990s; you couldn’t turn on MTV without seeing one of their music videos with Alicia Silverstone. Before flared and bell-bottom jeans hit the mainstream, we had to shop at vintage stores to find actual 1970s merchandise. My favorite pair of jeans came from the Canal Jean Company in Manhattan.

previous post Top 5 ways to travel in Turkey without renting a car
next post PHOTOS: Learning to snowboard in Park City, home of the pros