PHOTOS: A holiday market for hipsters! The Brooklyn Night Bazaar 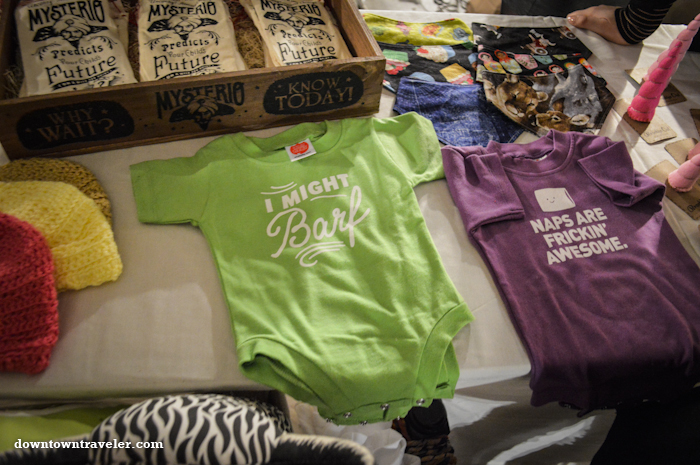 If you consider the perfect Christmas gift to be an ironic t-shirt, a toaster that imprints Jesus’s face on bread or a clock made from a canvas photo print, then we have the holiday market for you.

The Brooklyn Night Bazaar is a unique (and free) attraction in Williamsburg, Brooklyn. Held on Fridays and Saturday evenings from Thanksgiving to Christmas, the Bazaar features an art/craft market, live performances from indie bands and girls selling beer from shopping carts.

If you want to check out the Brooklyn Night Bazaar this year, you better hurry– it closes on Saturday, December 22nd (tonight)! The Brooklyn Night Bazaar was inspired by Asian night markets and is unlike any other holiday markets in the city. Housed in a massive, dimly lit Williamsburg warehouse, the Bazaar is open from 6 PM to midnight. This isn’t a precursor to an evening out– it is the main attraction. I stopped by on a Friday night and the line already stretched around the block by 8PM. The Brooklyn Night Bazaar features over 130 independent vendors, including photographers, graphic artists, jewelry makers and other artisans. In the first ten minutes at the Bazaar, I spotted two New York City artists who sold their work in Union Square Park a few years ago before Parks Department regulations restricted the artist vendors there.

You won’t have a problem finding holiday gifts for friends or family, especially if they have a sense of humor. My personal favorites were a baby onesie with the phrase “I might barf” and gold jewelry featuring the faces of music legends Tupac and Hall and Oates. Photographer Victor Spinelli with his work, which captures such varied subjects as an American-flag draped Michael Phelps and nude woman posing with an octopus. You won’t go hungry at the Brooklyn Night Bazaar as long as you enjoy fresh, locally-sourced ingredients and craft beer. With plentiful food, drinks, shopping and music at the Bazaar, all of your ‘night out’ needs should be covered. Music fans will also enjoy the free concerts at the Brooklyn Night Bazaar. Blogger Matt Stabile of The Expeditioner caught a performance by NYC-based indie band The Pains of Being Pure at Heart at the Bazaar last week. I didn’t stay long enough to catch the show, but I’ll be back next year for more free performances! previous post Beyond the Canal: Exploring Gowanus with Made In Brooklyn Tours (photos)
next post 2012 Year In Review: 5 Reasons We Love Our Readers!