Italy 101: A short history of the leaning tower of Pisa 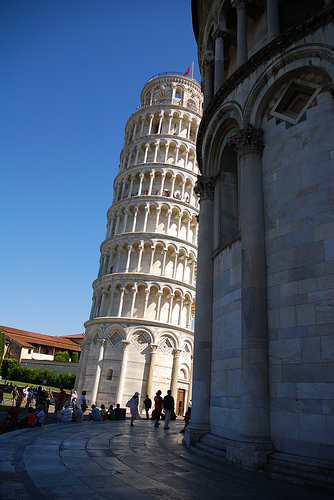 Although Italy is known for its rich culture, artistic legacy, architecture, history and food, tourists flock to its most famous building– somewhat ironically– due to its lopsidedness.

How did the leaning tower of Pisa become synonymous with Italy? Read on for a brief history and photos of this popular attraction. The Leaning Tower of Pisa’s free-standing belltower forms part of the Piazzi Dei Miracoli (“the square of miracles”), a UNESCO World Heritage Site in the walled heart of the city. The grounds also include the Cathedral of Pisa– a baptistery, cemetery, and another fine example of Romanesque style architecture– but it is the belltower that continues to attract tourists.

Origins of the tilting tower

Construction of the tower took place in three stages over a period of 344 years, beginning in 1173. There is some debate over which architect designed the building, with Bonnano Pisano and Diotisalvi being the two leading candidates.

When the second floor was added 5 years after building began, the tower began to tilt immediately because of the weak foundation. However, builders could not address the problem for 100 years as battles raged between Pisa and their neighbors in Florence, Lucca and Genoa. This was just as well, as it gave the underlying soil time to settle, giving some stability to the structure.

When construction continued, engineers built another 5 levels, compensating for the tilt by making one side taller than the other. Yet even more wars meant that the final floor, the bell chamber, was not added until 1372. There are 7 bells in all, corresponding with the notes in each of the major scales, with the largest bell added in 1655. Although structurally suspect, the closest the tower has come to actually toppling was during the Second World War, when it was used by the Germans as an observation post. An American sergeant named Leon Weckstein admitted in 2000 that while advancing on the town, he nearly gave the order for an airstrike on the Piazza Dei Miracoli, only to be stopped at the last moment due to the beauty of the tower.

Restoration work was carried out on the tower between 1990 and 2001 to restore the surface and to straighten it by 18 inches, which was accomplished by removing soil from the raised end. Since additional soil was removed in 2008 the the tower seems to have stopped moving for the first time.

Engineers now claim that the leaning tower of Pisa should be safe for another 300 years. However, Italian authorities are perhaps mindful of making sure that the tower is not too straight, as tourist numbers would surely fall if it was less precarious.

The leaning tower of Pisa is a cultural icon and a fine example of classic Romanesque architecture. Many low cost airlines operate flights to Pisa’s airport, the Galileo Galilei. The surrounding areas of Tuscany, particularly Florence, are also well worth a visit.

Have you been to Pisa?

previous post PHOTOS: 11 things to do in Seattle if you only have one day
next post Review: 2012 Blood Manor haunted house delivers 3D gore, zombie strippers and campy thrills