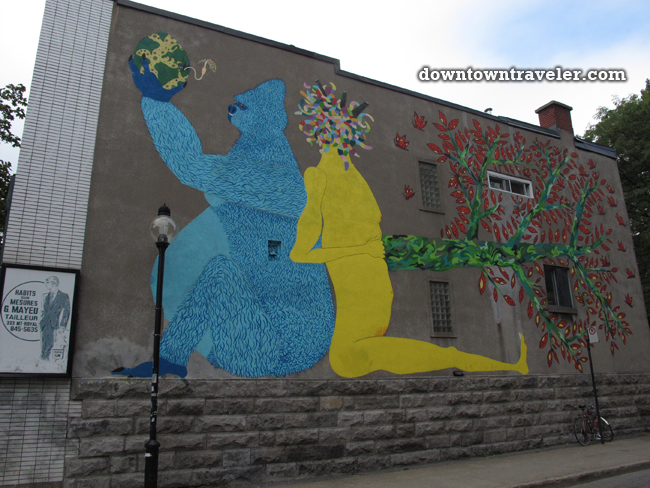 You can’t walk more than a block or two in this bustling Canadian city without coming across a provocative work of art. During a weekend getaway to Montreal this fall, the street murals made me stop in my tracks, stare and start snapping photos. Repeatedly. I found myself sprinting down alleys to see how a street mural would end!

Since street art doesn’t come with handy descriptions like you find at museums, I was left wondering what many of these works meant.

Fortunately, Montreal artist Reuben Peter-Finlay has agreed to share his knowledge of the street art scene with Downtown Traveler readers. Read on for his explanations of Montreal street art and don’t forget to check out Reuben’s blog to learn more about his work. I met Reuben by chance when he was painting a tribute to French-Canadian activists Gérald Godin and Pauline Julien in Montreal’s Plateau neighborhood. Similar to New York City’s East Village, the Plateau is known for its high concentration of artists as well as its funky vintage boutiques and cafes.

Some of the reasons I love street art are that it is free, available to the public, and allows you to get up close to the artist (assuming he or she isn’t posting the work by cover of night, which is often the case). Meeting Reuben was one of the highlights of my Montreal trip and I am excited to share his local knowledge with our readers! The raccoon has a double meaning, according to Reuben:

“The giant raccoons are a K6A crew production from last year’s Under Pressure Graffiti Convention, which has been held every year in August since, like, 1995. K6A has some of the best graffers and MCs in town, and the raccoon is kinda their mascot. In their own words, a raccoon is someone who’s always racking (stealing, misappropriating shit, or just plain acting stingy). A raccoon bums rides but never pays for gas, puffs on everyone’s joints but doesn’t buy weed, comes up with strategies to dodge cover charges at parties, etc.” Montreal attracts artists from around the world. As Reuben explains,

“This one was done by Gola, a young Italian artist who was visiting for a few days last year. Nice guy, very cheery and sociable, even with limited knowledge of French or English. [There]’s an amazing wall he painted on a school in Palestine, as featured by Wooster Collective.”

Visit Gola’s website to see his international works of public art, including the Palestinian mural that Reuben mentions. My street-art hunt through the streets of Montreal actually uncovered one of Reuben’s murals!

“Ha, I worked on this wall with a bunch of other guys (and one girl) from around here in 2009. We brainstormed over a couple pints and decided that we wanted to do a Mexican horror movie poster with chickens. I spray-painted the screaming leper-woman with the two chicken-heads in the lower left-hand corner and was supposed to do more but that weekend my girlfriend told me she was pregnant so we spent all Saturday in a hospital waiting to find out what we were supposed to do with the iud (they left it in – we have a son now), so when I finally got to painting everybody else had already sketched their outlines and claimed their space and I didn’t really feel like doing it anymore but I went through the motions anyways and landed it, sort of.”

As Reuben has pointed out to me, it’s always a good idea to photograph the entire work of street art in addition to close-up scenes. For more images of this mural, click here. I was surprised to see the smiling face of a familiar cartoon mouse while passing through Le Plateau-Mont Royal. Reuben wasn’t able to provide much background on this one– due to my hyper-focused camera work– but if any readers have knowledge of this mural, please leave a comment below!

“Trife Life is another well-established graffiti crew in Montreal, but I’m not too sure who did these mice. I recognize Dfek and possibly Shok’s lettering. You need to stop taking partial pictures of graffiti productions Leslie.” A creepy portrait of a pot-bellied, topless women does not earn raves from Reuben:

“This is some ugly Gay Village crackhead street-art. Kinda reminds me of that Nigerian dude who painted the Virgin Mary with elephant dung.” The edge of this street portrait caught my eye while stopping at one of Montreal’s famous bagel stores. As Reuben explains, it was created by a couple of well-known artists:

“Ok, the centre character is by Rage aka Howie Dewitt, and the letters to the right are by Cabin. That sliver of a wall to the left is by Peru.”

Reuben pointed me to an image of the full mural on FiveEight Art‘s Flickr stream:

>> Update 6/12: According to a reader, the order is a bit different. Howie Dewitt writes that the center portrait “was painted by Five8, not Rage. And that’s Peru to the right, and Cabin to the left.” This anti-McDonald’s stencil art popped up a few times during my Montreal getaway. It shows Ronald McDonald with vampire fangs and a fascist-looking emblem.

It turns out Reuben is not a fan of McDonald’s bashing since he has a rather personal connection to the Golden Arches. He writes,

“[The message behind this is] ‘McDonald’s is evil – they clear rainforest to raise their cattle!’ Shut the fuck up. McDonald’s helped me pay my way through college.”

Check out the commercial below– you might recognize a certain artist! [Hint: Look for the dancing guy in the video].

What do you think of Montreal’s street art scene?

previous post Photo Essay: The two sides of Havana, Cuba
next post PHOTOS: 8 fascinating ancient ruins from around the world