Review: Taking a movie tour of Central Park with On Location Tours 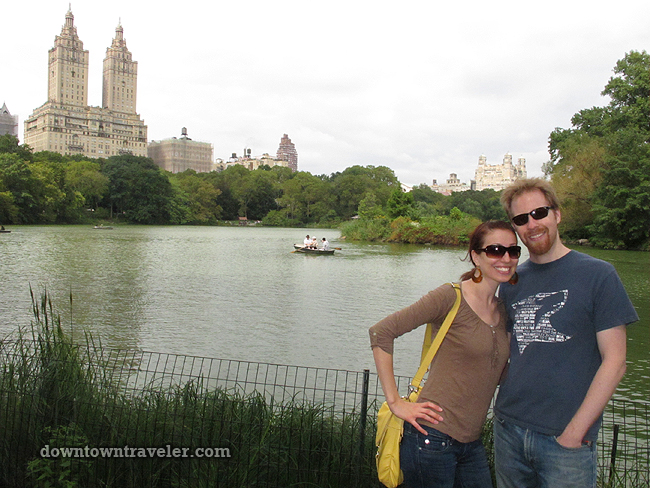 It seems like every other movie is filmed in New York City. And within the Big Apple, no area appears in more films than Manhattan’s iconic Central Park. Recognizable locations from famous movies– from Crocodile Dundee to Home Alone 2— can be found all over the park.

As movie buffs, we couldn’t pass up the chance to go on a Central Park movie tour with On Location tours. We spent a sunny October afternoon following an umbrella-wielding guide and learning about the history of the park. We enjoyed feeling like tourists in our own city and even learned a few things about this local landmark!

>> Read on for highlights and original photos of the movie tour We posed at the site where many romantic scenes are filmed in Central Park.

When we were invited by On Location Tours to experience one of their excursions, we immediately signed up for the walking tour of Central Park. Both Leslie and I tend to get a bit bored with guided tours and generally shun bus tours, but as movie fans and New Yorkers we were curious to see exactly where many of the famous scenes from our favorite movies were filmed.

The tour began at the southeast corner of the park, on 59th Street and 5th Avenue.  Our tour guide, Stephanie, was a petite woman with a powerful voice who originally came to New York to pursue an acting career. Our group consisted of about 30 people, who were mostly out of town tourists.

At first we felt a bit self-conscious following a tour guide, being proud New Yorkers, but no one paid much attention to our group. Our first stop was the Duck Pond just inside the park’s southeast entrance.  From here we were told of the history of the Plaza Hotel, within view just across 59th Street.  Stephanie explained that The Plaza is among the most filmed areas in Manhattan, most recently the focus of the Kate Hudson film Bride Wars. We also were given the useful tips that they have a food court in the basement and one of the nicest public bathrooms in the city!

As we worked our way north through the interior of the park Stephanie peppered us with anecdotes, both about the movie locations and the park’s history. We passed through The Mall, where famous scenes from Kramer vs Kramer and Hair were filmed. We also stopped at the Bandshell and the Bethesda Fountain, where more recent films such as Ransom and Home Alone 2 were shot. From here we saw the Boathouse Cafe, made famous in When Harry Met Sally and others.

In fact, Home Alone 2 was the most frequently mentioned movie! They seem to have cut a wide berth when filming in Central Park. Heading west, we stopped at a small bridge passing over the lake. We learned that this, for whatever reason, has been the scene of famous breakups in several movies and television shows from the past decade. Spiderman 3, Maid in Manhattan, and a recent episode of Glee all featured people getting dumped atop this bridge.

In real life, however, it has been the scene of more than one proposal during Stephanie’s tours. In fact, while we were there a couple of newlyweds posed on the bridge for wedding photographs. We then cut through Strawberry Fields, where there is a touching tribute to John Lennon, and made our way to Sheeps Meadow, home to famous scenes in Ghostbusters and Wall Street. We ended the tour on the West Side of the park near Tavern on the Green– not far from where John Lennon was shot.

By the end of the tour we’d learned a great deal about the park’s history and had a strong urge to rent Home Alone 2 and other film classics. It was a fun way to spend an afternoon and we even got in a bit of exercise! We’d recommend this tour to movie buffs and newcomers who want to learn more about Central Park, one of New York City’s most popular attractions.

The Central Park movie tour from On Location Tours lasts about 2 hours and costs $24 per person. It runs every Friday and Saturday at noon, from Spring to Fall. On Location Tours also offers a number of different movie tours throughout the city, including tours in Brooklyn and Manhattan, and specialty tours of Sex and The City, Sopranos, and Gossip Girl film locations.

We received a complimentary tour in order to write a review for Downtown Traveler. As always, all opinions are our own. If you’ve been on a tour with On Location Tours, we’d love to hear about your experience! Please leave a comment below.