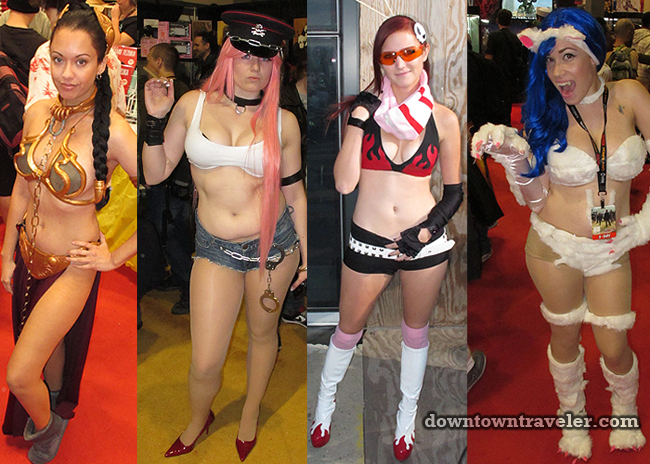 Thousands of comic book, sci-fi and fantasy fans made the pilgrimage to Manhattan’s Javits Center this weekend for New York Comic Con 2011.

Attractions included previews of The Avengers movie and the new season of AMC’s Walking Dead, along with celebrity panels and signings. However, the highlight for me this year was the fan costumes.

Men, women and children created handmade outfits to celebrate their favorite characters from classic comics like Batman to anime titles I can’t even pronounce. I was particularly impressed by the female fans, whose outfits combined power, sex appeal and creativity.

Scroll down for my 43 favorite women’s costumes from New York Comic Con (NYCC). You may find inspiration for next year’s comic convention… or for your Halloween look! You can count on these powerful ladies– Wonder Woman, a creature I assume to be Spider-Man’s female doppelganger, and X-Men characters Storm and X-23 Claws (the female version of Wolverine)– to keep you safe while maintaining their perfect hair and makeup! I hadn’t heard of the World War II-inspired anime/manga series Hetalia until I spotted several of the key characters at NYCC. These girls, who were attending separately, were dressed as (l to r) Italy, Prussia, Russia and America.

Don’t mess with these women When it comes to powerful and sexy characters, it’s hard to beat Disco Dazzler (far left) and the Black Widow (far right).

Everyday wear, up a notch These young women were not dressed as specific characters, but as a ramped-up versions of themselves. The girls on the left revealed they wear self-applied face art every day (the pink hair is not a wig). Whether you call the fashions goth, lolita or another label, you have to admit… these girls have a great sense of style! These Comic Con fans embraced the dark side– color-wise, that is. From an elegant fitted gown to a Corpse Bride outfit, they have their own take on the “little black dress.” Japanese influence is widespread at Comic Con, with the Anime Festival drawing ever-larger crowds. These ladies opted for lacy, romantic costumes, which they matched with Converse sneakers.

Fans that go the extra mile These Comic Con attendees know how to accessorize! They used full-body makeup, homemade weapons and electrically-wired hats to complete their outfits. To achieve these looks, you’ll need a glue gun, some mechanical know-how and a great deal of patience. Like many NYCC attendees, this female fan made her own weapon from scratch. These women created their own characters using self-applied makeup and special effects (like a fake scar and supernatural contacts on the medieval/fantasy fan at left). Anime and manga fans tend to be younger than the average Comic Con attendee; many are still in high school. These NYCC attendees rocked red outfits inspired by their favorite characters– or, in the case of the girl in the center, Japanese culture. Group costumes are always in vogue at NYCC. These fans dressed as their favorite characters from Final Fantasy 13. The Harry Potter series may be over, but this trio of friends kept the spirit alive with their Hogwarts-appropriate outfits.