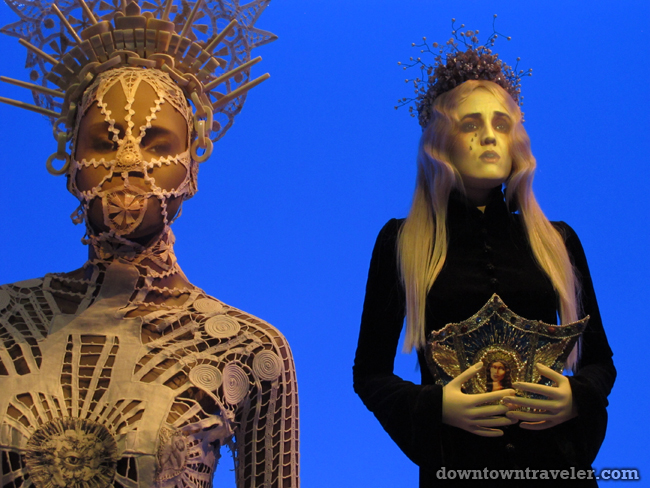 Madonna has changed her look countless times over the past 30 years, but I’ll always associate her with one signature style: pointy cone bras. She popularized the gravity-defying underwear during her Blond Ambition Tour (1990-1991), igniting a lingerie-as-outerwear trend that is still going strong 20 years later.

Madonna’s corsets were the brainchild of French designer Jean Paul Gaultier, the subject of an expansive exhibit at the Montreal Museum of Fine Arts. You don’t have to be a fashionista to appreciate the show, which features Gaultier’s original designs from 1970 through 2011.

Using animatronic mannequins, a rotating runway and keepsakes from Gaultier’s childhood, the museum provides an inside look at the man known as fashion’s enfant terrible. Madonna’s pointy bra is just one of the avant-garde (and often bizarre) designs on display; other key looks include skirts for men, a “body suit” decorated with muscles and veins, and fur hats inspired by Hasidic rabbis.

If you can’t make it to the show– which ends today– scroll down for the highlights.

The Jean Paul Gaultier exhibit is divided into five rooms, each with a distinct theme. An entire section is devoted to cone bras and pointy corsets, which have fascinated the designer since childhood. Madonna’s pink corset merits its own display case, and is surrounded by behind-the-scenes photos of the singer and her Blond Ambition Tour dancers at wardrobe fittings. The Montreal Museum of Fine Arts brings the designs to life with rotating displays that provide 360-degree views of each piece. Gaultier’s childhood teddy bear, Nana, is the most intriguing exhibit in the show. This well-preserved, ’50s-era toy is evidence of the designer’s lifelong obsession with women’s undergarments. The golden-haired bear has cone-shaped breasts attached to its chest!

Known as the creator of “men’s couture,” Jean Paul Gaultier enjoys blurring the boundaries between men’s and women’s wear.

One room of the exhibit is devoted to sexually provocative, S&M-influenced fashion; the back wall is covered by a tic-tac-toe grid of vignettes. In the middle compartment, a leather-clad female mannequin straddles a harness-wearing (possibly male) mannequin.

Each design is daring and thought-provoking– typical of Gaultier’s work. From rabbis to Asian sherpas, Gaultier’s list of influences is vast. An entire room at the Montreal Museum of Fine Arts show is dedicated to fashions inspired by world cultures. Gaultier also elevated backpacking to an art form with this Mongolian-inspired look, featuring a fur rucksack and platform boots. Animal lovers may wince at Gaultier’s python-skin tights and crocodile-scale crochet dress, just a few of the unusual materials he has used in his designs.

Parts of the Gaultier show resemble the “Bodies” anatomical exhibit more than a traditional art show. This trio of Gaultier creations– displayed together on a rotating platform– show how the designer’s corsets are inspired by the lines of the human form.

Live from the runway

Most of us haven’t scored front row seats to a fashion show– the natural habitat for Jean Paul Gaultier’s couture creations.

The Montreal Museum of Fine Arts addresses this issue by using animatronic models (think Disney World’s “It’s a Small Word” attraction) and mechanical rigging in many of its displays. Gaultier’s designs sashay down a life-size runway, thanks to some old-school technology: a conveyor belt. (When I visited, a stylishly dressed mechanic with a tool kit was perched near the back of the runway, just in case).

Although these were clearly mannequins, I felt a bit like a Fashion Week attendee seeing Gaultier’s daring fashions grace the catwalk. Many of the runway looks are influenced by vintage business wear– particularly the highly-structured women’s suits of the 1940s. With a twist, of course. I was entranced by the animatronic mannequins at the exhibit’s entrance. While their limbs are motionless, their faces blink, smile and even speak. The life-like features are created using projectors on the ceiling. Gaultier has tweaked the classic sailor’s outfit to match his own sensibilities– edgy, gender-bending and fun. And that’s exactly how I would describe this museum exhibit.

Montreal Museum of Fine Arts
(le Musée des beaux-arts de Montréal)
1379 Sherbrooke Street West
Montreal, Quebec, Canada H3G 1J5
Phone: 1-800-899-6873
Website: www.mmfa.qc.ca
Twitter: @MBAMTL
Cost: Admission to most of the Museum’s exhibitions is free at all times. For special exhibits like Gaultier, the fees range from free (for children under 13) to $15 (for adults 26-64).

Click on #MontrealArts to read my other Montreal posts.