The economy will improve in 2011, according to street artist Olek. To show her optimism about the new year, Olek covered New York’s famous “Charging Bull” sculpture in crochet.

“This crocheted cover represents my best wishes to all of us. It will be a great, prosperous year with many wonderful surprises!!!”

This act of ‘guerilla art’ was inspired by the bull’s sculptor, Arturo Di Modica, who placed the sculpture–without permission–near Wall Street in December 1989.

Di Modica’s bronze sculpture weighs 7,100 lbs and is over 11 feet tall. Many spools of yarn were required to cover it in crochet, Olek revealed to Downtown Traveler in an email: Olek’s crocheted artwork lasted several hours before being taken down by a caretaker. She had hoped it would stay up for at least 24 hours. She explained in an email to Downtown Traveler,

“i spoke to local security and police. they got my info just in case it should have been removed. they didnt want to destroyed it. they are human!!!”

While she was frustrated that the work was removed so quickly, Olek was pleased with her accomplishment. She noted, “in the end – I MADE IT!!!!” 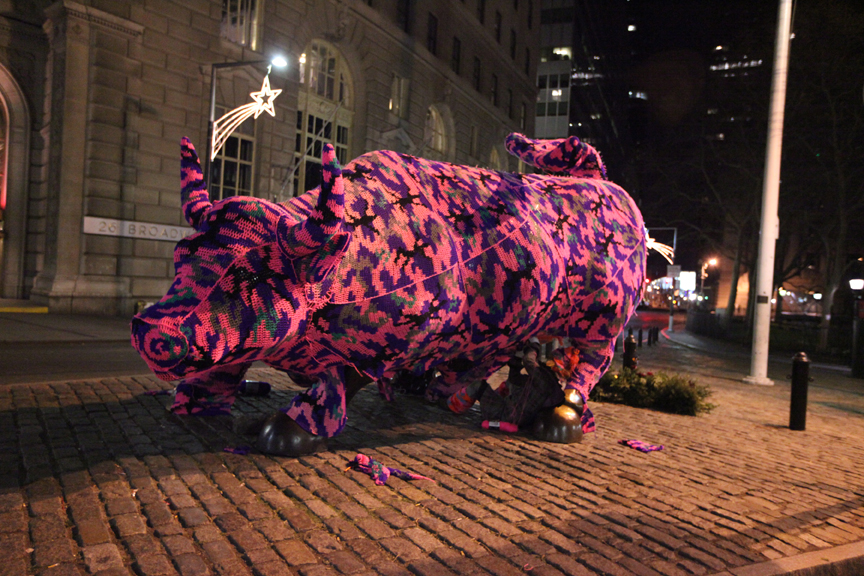 Olek is known for her unique street art. Her crocheted bicycles and cars are a familiar sight in the Lower East Side; she had her first solo show, Knitting is for Pus****, at the Christopher Henry Gallery in September.

“Who knew crochet could be so edgy?” noted G Train Salon curator Krista Saunders, who is a fan of the artist’s style. “Olek’s work is as vivacious and original as the artist herself.”

Click on the video below to see Olek working on the “Charging Bull.” (Note her crocheted ladder– the perfect ‘guerilla art’ accessory).