Should you upgrade your iPhone? Pros and cons of the iPhone 5 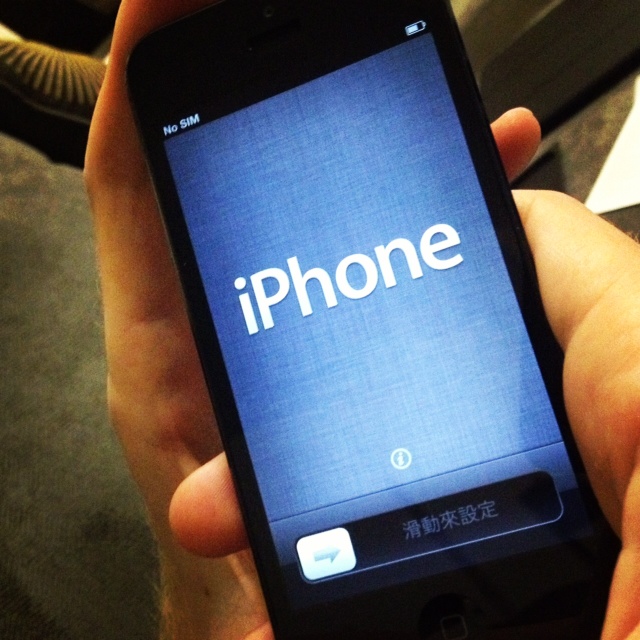 Last week I managed to score the much coveted iPhone 5 from the first batch of deliveries, having ordered my phone online on the morning it became available. A few days later I found myself waiting with an anxious crowd at the local UPS office to pick it up. I gripped the package tightly on the walk home, shielding it from potential Apple-loving thieves. The second I arrived at my apartment, I anxiously ripped open the packaging and started the activation process.

Considering my prior phone was a half-broken iPhone 3GS, virtually any new handset would have been a significant upgrade. However, I was disappointed to immediately hit some serious issues with the iPhone 5 that left me unable to use this sleek new model for a full day.

Read on for pros and cons of the new iPhone 5, as well as a workaround solution I used for the activation issues.

The Drawbacks of iPhone 5

Unfortunately, I ran into problems with the iPhone 5 straight out of the box. After powering up the phone for the first time, I was confronted by a discouraging “No SIM Card Installed” message.  Hmmm…that’s odd, I thought. I could have sworn these phones came with SIM cards pre-installed; I never touched the SIM card in my iPhone 3GS. Maybe I just needed to activate it first.

Great! I have a brand new iPhone 5… now why won’t it activate?!

I called the AT&T activation line from my old iPhone and followed the automated prompts, but the iPhone 5 still would not activate. At this point, I went to call customer service from my old iPhone, only to find that the old phone had been deactivated!

Suddenly finding myself without a phone, a situation I have not experienced for many years, I borrowed my wife’s iPhone 4S to call AT&T customer service. After a frustrating, useless 20-minute conversation with an agent who had no experience at all with the iPhone 5, I Googled the problem and found out that I was far from alone. 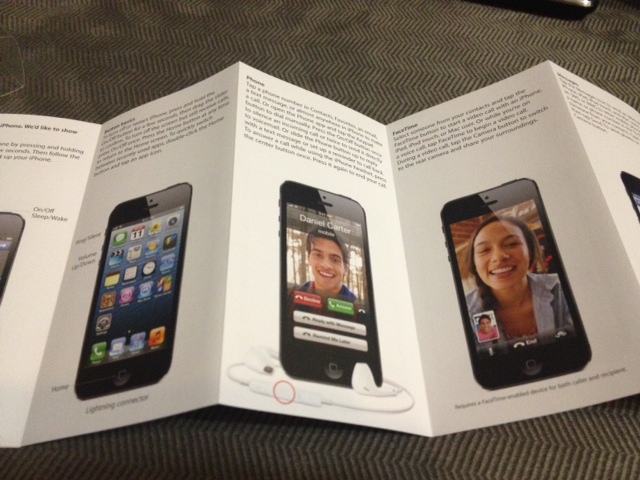 It was only when I read online posts from other frustrated iPhone 5 customers that I was able to solve the SIM card activation issue. I found several message boards filled with similar complaints; the only apparent solution that worked for other users was to visit an AT&T store for a replacement SIM card.

Twenty-four long hours later, after a visit to an AT&T retail store, I finally had a functioning iPhone.  A small frustration, but a frustration nonetheless.

Like many Apple product launches, there are several shortcomings and glitches. The new Apple maps application, for example, really falls short of the Google maps app it has replaced. I personally haven’t noticed any of the much-publicized issues with misplaced landmarks, but as a New Yorker I find the lack of mass transit directions to be a major shortcoming. Presumably this is something they intend to add, but until then the app is largely useless in New York City. 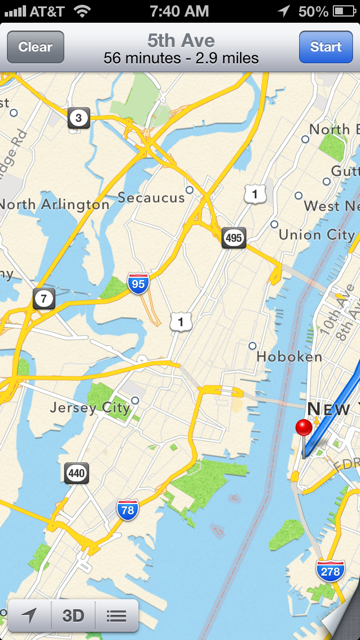 The new Apple Maps looks great, and has even partnered with Yelp to provide easy-to-access reviews of local eateries. 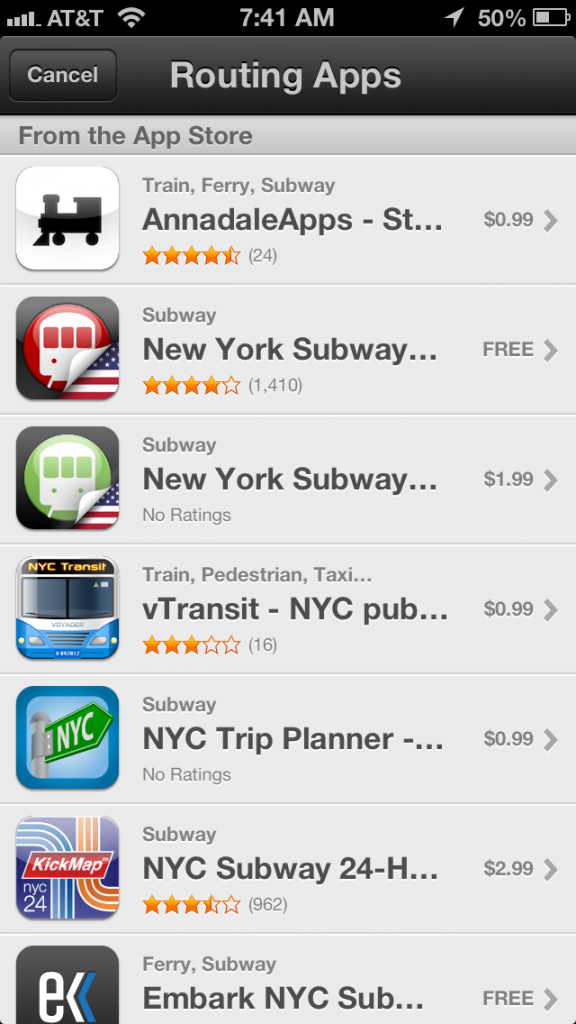 However, Apple Maps does not provide subway directions. When you hit the ‘public transportation’ button, it brings you to the iTunes store to download a separate app!

Finally, Apple has dramatically redesigned the shape of their headphones, apparently with the goal of having them fit better and more snugly in the ear. Unlike some users, I loved the original earbuds; they fit well enough that I could go for 18-mile runs without having to ever readjust them. The new ones, however, fall out of my ears regularly, and running with them is impossible. If you are training for a marathon (as I am), make sure not to throw out your old Apple earphones the second you get the iPhone 5. 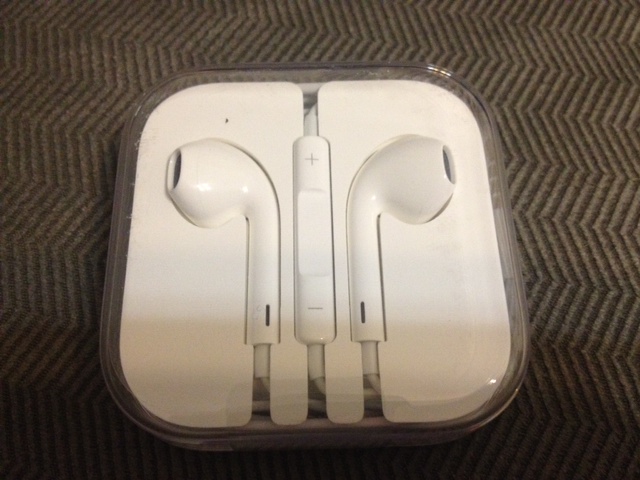 The new iPhone 5 earphones… sleek, shiny and not great for runners.

The following iPhone 5 features are a wash. Some of these features have been updated to include new benefits, but acquired some flaws in the process. Other features are lacking, but the blame rests with the service provider and not Apple.

Siri, the voice command system, seems much improved, with a better understanding of commands, a larger database of information, and the new ability to open apps.

There are various glitches with this as well, however; when I ask for the current temperature here in New York City, for example, it gives me the temperature of the small town of New York, Texas. After I checked the weather several times and it was clearly wrong, I did a bit of Google searching and discovered the error. You would think that Apple would at least get New York City weather right, since it is one of its top markets! 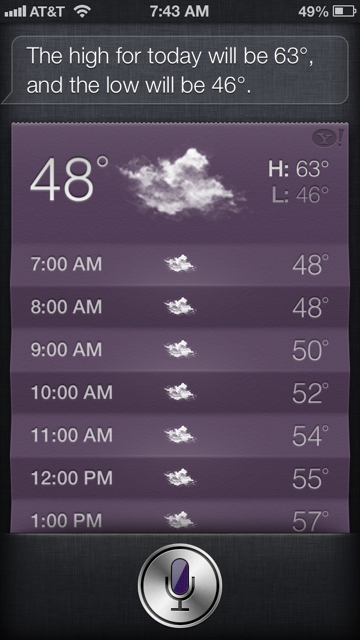 No, Siri, New York City is not in Texas…

Unlike some Internet users, I’m not that upset about the iPhone’s new charging plugs. I didn’t have any expensive iPhone accessories before, so I welcome the faster speed that comes with a different-sized port and personally don’t see many drawbacks. However, note that you won’t be able to use the many cords and cables (including car chargers) that you’ve accumulated through the years as an iPhone user. 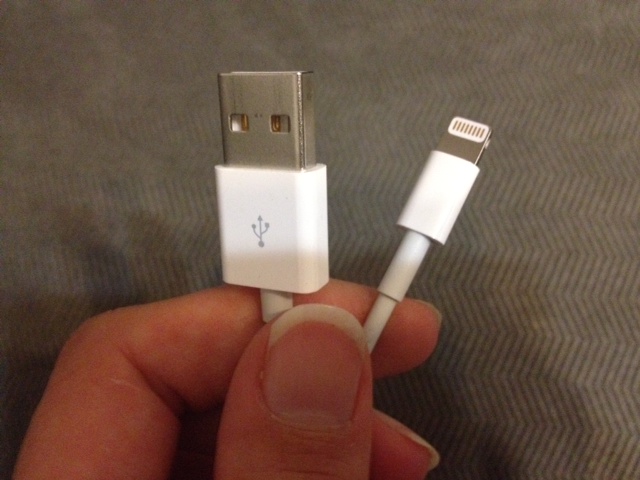 With the iPhone 5 being so new, third parties have not yet started producing cheap cases and accessories. The cheapest “bumper” case on the Apple website is $29… pricey for a thin piece of plastic. I’ll wait until less expensive models pop up on Amazon. Until then, I’m carefully guarding my new handset and praying against scratches, bumps and drops.

While the AT&T 4G network is much faster, the same spotty coverage remains. Dead spots are still not uncommon throughout the New York area.

The Benefits of iPhone 5

On the bright side, the phone is significantly faster, both in hardware processing speed and with the 4g network. Apps open quicker, video streams flawlessly. 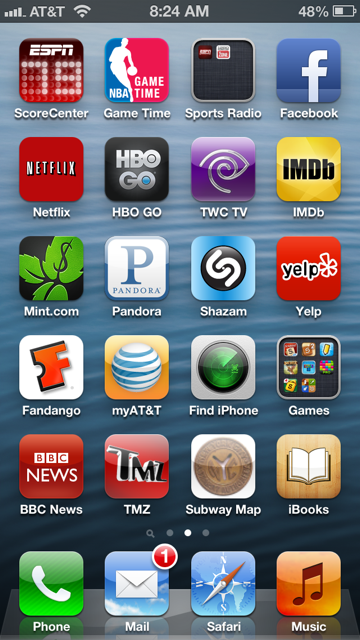 Time to load up your phone with apps… the iPhone 5 is much faster than prior models!

With the slightly larger screen, it is almost bearable to watch a movie on the iPhone 5. The Netflix app loads quickly and the screen resolution is excellent. 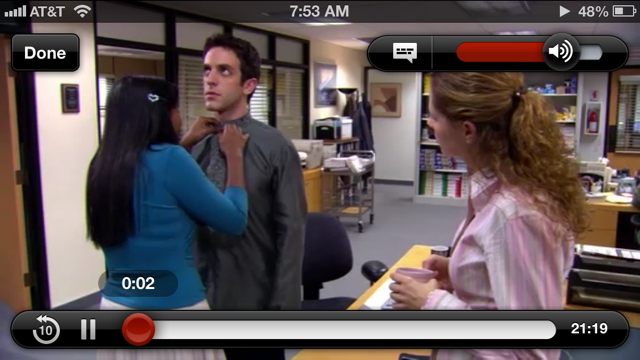 Watching The Office on the iPhone 5’s Netflix app.

While the iPhone 5 is taller than the iPhone 3GS and iPhone 4S, it is also lighter. The skinnier build makes a difference when holding the phone; it just feels much sleeker than older models. The dimensions and weight make it easy to flip around quickly for photo taking and add to a sense that this is a light-as-air (and fragile) phone. While the back of the handset is ridiculously smooth, it hasn’t fallen out of my grasp yet. 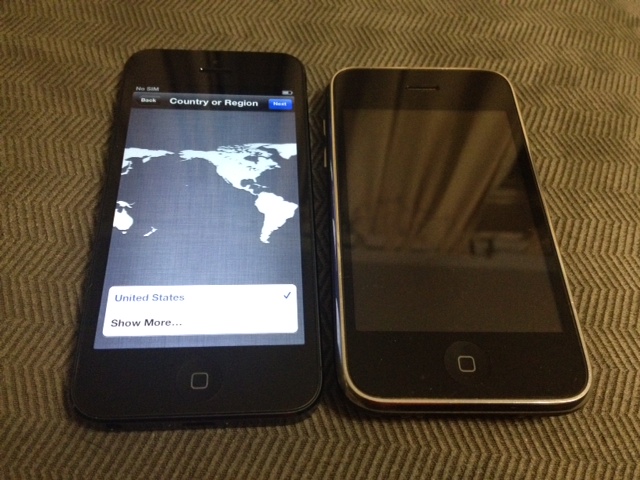 The iPhone 5 versus the iPhone 3GS… taller, skinnier and way faster.

Overall, the iPhone 5 is a significant upgrade from my iPhone 3GS. Despite receiving a defective SIM card and the lack of effective AT&T phone support, I’m glad I upgraded. However, if you have a more recent model, particularly the iPhone 4S, purchasing the iPhone 5 is probably unnecessary. There are a number of frustrating glitches and oddities discovered so far but hopefully a software update is not far away.

Do you have a new iPhone 5?

previous post What to expect at NYC's scariest Halloween haunted house: 2012 Blackout Haunted House Review
next post Get touched by a serial killer at the Nightmare: Killers Haunted House (2012 review)