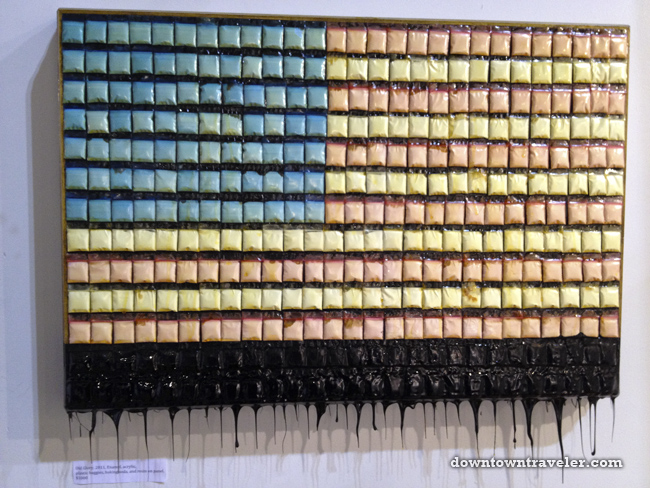 The American flag has been a popular artistic subject since Jasper Johns created his iconic painting “Flag” (1954–55). Two artists at Armory Arts Week 2012 have tackled this powerful national symbol in very distinct ways.

Scroll down for images of American flag art created by these US-based artists. If you look closely at Rob Servo‘s “Old Glory 2011” you’ll notice that the stripes on this US flag are actually bags of (fake) cocaine; the bottom of the flag drips with dense black paint. The piece is about America’s addiction to drugs and oil, Servo explained at his Fountain Art Fair booth. A nearby piece by Servo depicts American flags made of wood and old analog film, and riddled with buckshot and birdshot bullet holes from Servo’s own guns. This work comments on America’s other addiction– to guns. Based “in the country” (where one presumes his gun shooting doesn’t raise many eyebrows), Servo amiably chatted about his work on Friday as he drew a logo for his booth. This is his sixth year at the Fountain Art Fair. American artist Jeremy Dean‘s recent work deconstructs and “re-contextualizes” the US flag because it is a symbol of power and wealth. His past projects have included converting a Hummer H2 into an old-fashioned stage coach.

Seemingly ripped from the plot of the TV show Homeland, two American flags at the Volta show bear the words “hero” and “hostage.” These are not paintings but are actual American flags that have been taken apart string by string and refashioned. In “Hero/Hostage” (2012), Dean took the string from one American flag and created two new flags by placing strings horizontally in one and vertically in the other. According to the Cynthia Corbett Gallery that represents Dean, this process is significant:

Dean feels that the extreme polarization our society is currently experiencing: socially, economically, and politically is literally rending the fabric of America, so this work is a physical representation of the state of the Union, that once polarized as opposites can never fully reintegrate. Dean overlays his reconstructed flags on prints of polarizing imagery, like this 1940’s-era pinup riding a bomb.

What do you think of this American flag art?